A STEWARD in Paris Saint-Germain’s match against Maccabi Haifa went to extreme lengths to try and stop a pitch invader.

For some bizarre reason they decided to throw a SHOE at the suspect in an attempt to stop him from reaching Lionel Messi.

During the match in the Israeli city of Haifa, a fan decided to run onto the pitch to come face to face with the likes of Messi, Neymar and Kylian Mbappe.

Footage posted to TikTok shows them jumping over the advertising board, with the steward responding by grabbing them by the leg.

But all the steward succeeded in doing was pulling off the invader’s shoe.

And then, with the culprit on the floor, the steward THREW the shoe directly at them. 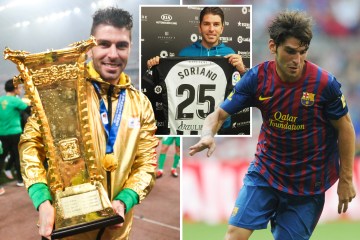 The cheap shot didn’t deter the suspect though, as they got up and scampered away towards Messi.

They had just about enough time to launch themselves into Messi’s arms before another steward, who actually ran after the invader instead of chucking a shoe, wrestled them to the ground.

Pictures captured the moment the culprit, with one shoe missing, was dragged away from Messi by security.

Fans on social media couldn’t believe the steward thought throwing a shoe would be the best way to stop the suspect.

One wrote: “Was that them doing their best to stop him?”

Another joked: “He be like, yep that should stop him.”

While a third said: “Bro threw the shoe and did nothing else.”

Messi wasn’t too deterred by the incident, scoring in PSG’s first goal in their 3-1 comeback win.

In doing so Maccabi Haifa became the 39th team he has scored against in the competition – breaking a record set by Cristiano Ronaldo.

Mbappe and Neymar also netted for the French champions, who made it two wins from two to start their Champions League campaign.