LIONEL MESSI showed his class as PSG thrashed Clermont in their Ligue 1 opener.

The Argentine legend, 35, scored the goal of the game in a 5-0 rout at the Stade Gabriel Montpied on Saturday.

Messi netted a brace – but it was his second that had fans on their feet.

Leandro Paredas found his fellow countryman all alone in the box, who had his back to goal.

Messi chested the ball in the air before executing a brilliant overhead kick – looping the ball over Mory Diaw in the Clermont net.

It took just nine minutes for PSG to take the lead – who last week were in rampant mood against Nantes in the Trophee des Champions recording a 4-0 win. 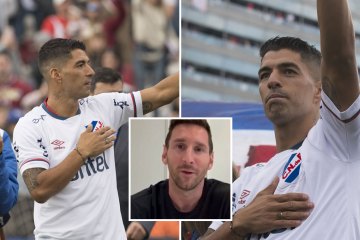 Messi brilliantly flicked the ball into the path of Neymar, who finished an excellent move.

Achraf Hakimi scored midway through the first half from a lightening counter-attack, before Marquinhos headed Neymar’s free-kick into the net.

Neymar then provided a fourth for Messi, before the forward capped off an excellent performance with his stunning goal.

Last week it was reported that Barcelona will go all out to re-sign Lionel Messi in an emotional transfer.

President Joan Laporta claims he feels “indebted” to the Argentine after overseeing his teary exit in 2021.

Messi, 35, joined Paris Saint-Germain for FREE that summer and is out of contract next June.

And Laporta “dreams” of snapping him up for his final years.

He said: “I feel indebted to Leo Messi.

“I would like him to end his career in a Barca shirt, and be applauded at all the stadiums.

“I feel partially responsible for how things ended, and I feel that this is a temporary end and that we will make this dream a reality. At least that is the dream.”