In the final 15 minutes on Sunday’s game and with Bayern having already scored what turned out to be the winner, the striker tangled with Joshua Kimmich in the area.

Italian referee Daniele Orsato indicated his belief that the German got the ball as the play unfolded.

However the replays suggested that was not the case, with Mbappe touching the ball away before hitting the deck.

Whether that represented a clear and obvious error from the referee was left up for debate.

But BT Sport’s commentators insisted they had not received any signal that VAR had even checked the incident.

Former Premier League referee Peter Walton stated that the decision could easily have been overturned.

He told BT Sport: “The more we look at it in slow motion, the more we can clearly see there was contact on Kylian Mbappe’s heel.

“And it could have been given as a penalty kick.”

Viewers were left asking questions of VAR with Orsato not going over to the screen or taking a significant break in play to check the potential penalty.

Bayern were also denied a spot-kick late in the first-half when Kingsley Coman went down under pressure from Thilo Kehrer, with similar short shrift from the video reviewers.

Twitter user Andy asked: “Did VAR not check that tackle on Mbappe by Kimmich?”

One fan pondered: “Hmm, both the referee & VAR waved this moment away but the replay showed that Kimmich didn’t hit the ball while he did hit Mbappe.”

Another queried: “Should’ve been a pen given for that foul on Mbappe wtf? Is VAR even there?”

While one viewer tweeted: “Mbappe taken down in penny area 2 feet from ref, no VAR check. This year’s chalked.” 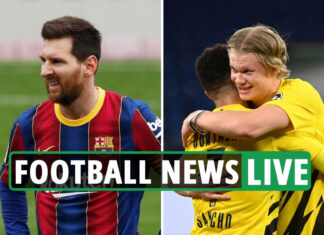 sportslatestnews - February 28, 2021
0
LIONEL MESSI could yet stay at Barcelona despite being linked with a big-money move away from the Nou Camp. Also on the transfer front,...