Megan Rapinoe has got engaged to Seattle Storm basketball player, Sue Bird, after four-years together.

The USA World Cup winner, 35, was pictured getting down on one knee, in a cute snap on Bird’s Instagram page.

The post did not include a caption, but just a picture of Rapinoe proposing to the basketball ace, poolside.

The snap has sent fans into meltdown, and one Twitter user said: “Sue Bird and Megan Rapinoe getting engaged is the one and only bright spot of 2020.”

Another added: “Sue Bird and Megan Rapinoe are engaged, which means I’m going to spend the evening crying into ~several~ glasses of wine.”

The duo, who became an item in 2016, are the ultimate couple goals given their glittering trophy cabinets.

Rapinoe has an equally impressive resume, considering she is a back-to-back Women’s World Cup champion with the United States Women’s National Team.

In 2019 she won the second ever Ballon d’Or Feminin – awarded to the best female player of the year.

In her acceptance speech she called out Lionel Messi, Cristiano Ronaldo and Zlatan Ibrahimovic for not speaking out against sexism.

She has publicly stood up to racism, homophobia and sexism, and she also said on the night: “On the one hand, I am a very good footballer.

“On the other hand, my action off the field attracts support because people understand that I’m trying to find solutions to the problems of society.”

But she ruffled feathers calling English fans “uptight”, after Alex Morgan’s “perfect” tea-sipping celebration when the USA beat England in the semi-finals of the tournament. 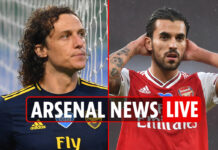