UNAI EMERY stunned Bayern Munich and Juventus on the way to firing Villarreal to the Champions League semi-finals less than 12 months ago.

But even the mastermind knockout manager and four-time Europa League winner is not immune from a huge FA Cup upset – or Aston Villa‘s woeful run in the competition.

Emery’s side, including former £145million man Philippe Coutinho, looked to be in total control at home against League Two Stevenage in their third-round clash.

But Leander Dendoncker’s moment of madness sparked a red card, penalty and Stevenage equaliser with two minutes to go.

And the stunning turnaround was complete in the 90th minute as Dean Campbell caught Villa’s defence napping and Robin Olsen out at his near post to fire the Boro through.

It means the West Midlands side have lost to a fourth-tier side in the FA Cup while playing in the top tier once again – just as they did in 1964 against Aldershot. 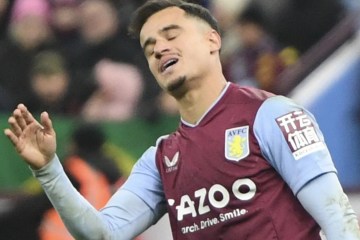 More worryingly and painfully for the fans, the defeat also extended a truly wretched stretch of results for the Villans, who have now lost EIGHT FA Cup matches in a row.

The club reached the final in 2015 when they lost to Arsenal.

The following season, Remi Garde’s men needed a replay to scrape past Wycombe then were stuffed by Manchester City in round four.

Since then, they have crashed out in round three in seven successive seasons.

Emery – who declared his ambition was “winning the FA Cup” this season – apologised to supporters.

The former Arsenal boss, 51, said: “I’m upset, disappointed and sorry for our supporters. We have lost a very good opportunity to do something in the FA Cup.

“It is a process and I will continue to be demanding. Maybe now, I need to be more demanding.

“I’m very shocked. But it can happen when you have good chances to score but don’t take them.

“They had chances as well. Our mistake was a big mistake and they scored. After that, the last five minutes, we were a little upset and did not control our minds.”