Salah scored Liverpool’s third in their 5-0 thrashing of Atalanta which put the Egyptian on 21 goals for the Reds in Europe’s premier club competition.

And with plenty more opportunities ahead of Salah, now-Rangers boss Gerrard says it’s only a matter of time before his record is demolished.

Speaking ahead of his team’s 3-3 Europa League draw at Benfica tonight, the Reds legend said: “Records are there to be broken, of course they are.

“I was very proud to see Mo Salah equal my scoring record for Liverpool in Europe, it was only a matter of time.

“I honestly think he’ll go on and embarrass my record — and I hope that he does.”

Rangers forward Alfredo Morelos equalled Ally McCoist’s 21-goal European haul for the Glasgow side last week and then broke it on Thurday – scoring his team’s third in a 3-3 draw with Benfica.

And Gerrard added: “Mo Salah and Alfredo Morelos go about their business always being hungry for goals.

“My job for Liverpool was slightly different.

“There is nothing better than seeing someone going for a record and then smashing it to pieces.”

Salah, 28, has scored 103 goals for Liverpool since he joined.

But in a huge blow to the Reds it emerged he could miss a huge chunk of next season as Egypt want him for the Olympics and the Africa Cup of Nations.

And Jurgen Klopp jumped to his defence after he was accused of diving during the Reds’ narrow 2-1 win against West Ham last weekend. 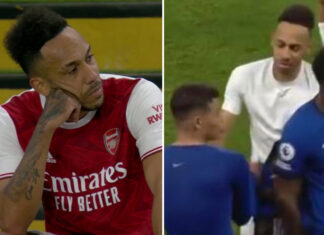 sportslatestnews - May 13, 2021
0
PIERRE-EMERICK AUBAMEYANG played a key role in Arsenal's shock win over Chelsea - yet couldn't help but look glum after being subbed off. Arsenal...