Pep Guardiola’s side paid the price for a limp display and never recovered after first half goals from Sekou Mara and Moussa Djenepo at St Mary’s.

City sit second in the Premier League, while Southampton are 26 points below them at the bottom of the table.

But that huge gap wasn’t evident on a wet and windy night on the south coast that Guardiola will want to forget in a hurry.

For the first time in 16 domestic cup quarter-finals, Guardiola had finished as a loser and he could have no complaints about the result.

City’s surprise exit continued a worrying trend of lacklustre performances this season in games Guardiola would expect them to win, a failing that has left the champions trailing five points behind leaders Arsenal in the Premier League.

Guardiola, who has won the League Cup four times since arriving at City in 2016, will demand an immediate response in Saturday’s crucial Premier League derby against Manchester United.

He made four changes from Sunday’s 4-0 FA Cup third round rout of Chelsea, with Kalvin Phillips handed his first City start since his £42 million ($51 million) move from Leeds last year.

Phillips was labelled overweight by Guardiola after he returned from England duty at the World Cup and the midfielder hardly made the Spaniard eat his words with a largely anonymous display that ended with his substitution after 63 minutes.

Phillips’ flop was in keeping with City’s unusually limp display, with their lack of poise and purpose visible right from the start.

City failed to heed the warning and Mara put Southampton ahead in the 23rd minute.

Lyanco cut out a loose pass from Sergio Gomez and delivered a low cross that France Under-21 international Mara swept past Ortega for his first goal for the club.

There was worse to come for City five minutes later when Mali international Djenepo was allowed to advance unchecked before curling a superb 30-yard strike over Ortega, who was caught too far off his line.

Tired of City’s lethargy, Guardiola sent on Kevin De Bruyne at the interval and Erling Haaland after 56 minutes.

Julian Alvarez was denied by Gavin Bazunu as City finally exerted some pressure but it was too little, too late.

Southampton have never won the League Cup, losing the 1979 and 2017 finals, and boss Nathan Jones will hope this surprise success can be the springboard to silverware and, more importantly, Premier League survival.

Southampton were joined in the semi-finals by Nottingham Forest, who beat Wolves 4-3 on penalties after a 1-1 draw at the City Ground.

After last weekend’s embarrassing FA Cup loss against second tier Blackpool, Forest are back on the Wembley trail as they reached the League Cup semi-finals for the first time since 1992.

Forest have won the League Cup four times with their most recent triumph coming in 1990.

They took the lead through former Wolves centre-back Willy Boly, who tapped in after Morgan Gibbs-White’s corner deflected off the crossbar in the 18th minute.

Dean Henderson was Forest’s shoot-out star as he saved penalties from Joe Hodge and Ruben Neves.

Manchester United and Newcastle had reached the semi-finals on Tuesday after their wins against Charlton and Leicester respectively. 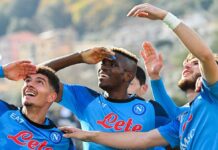