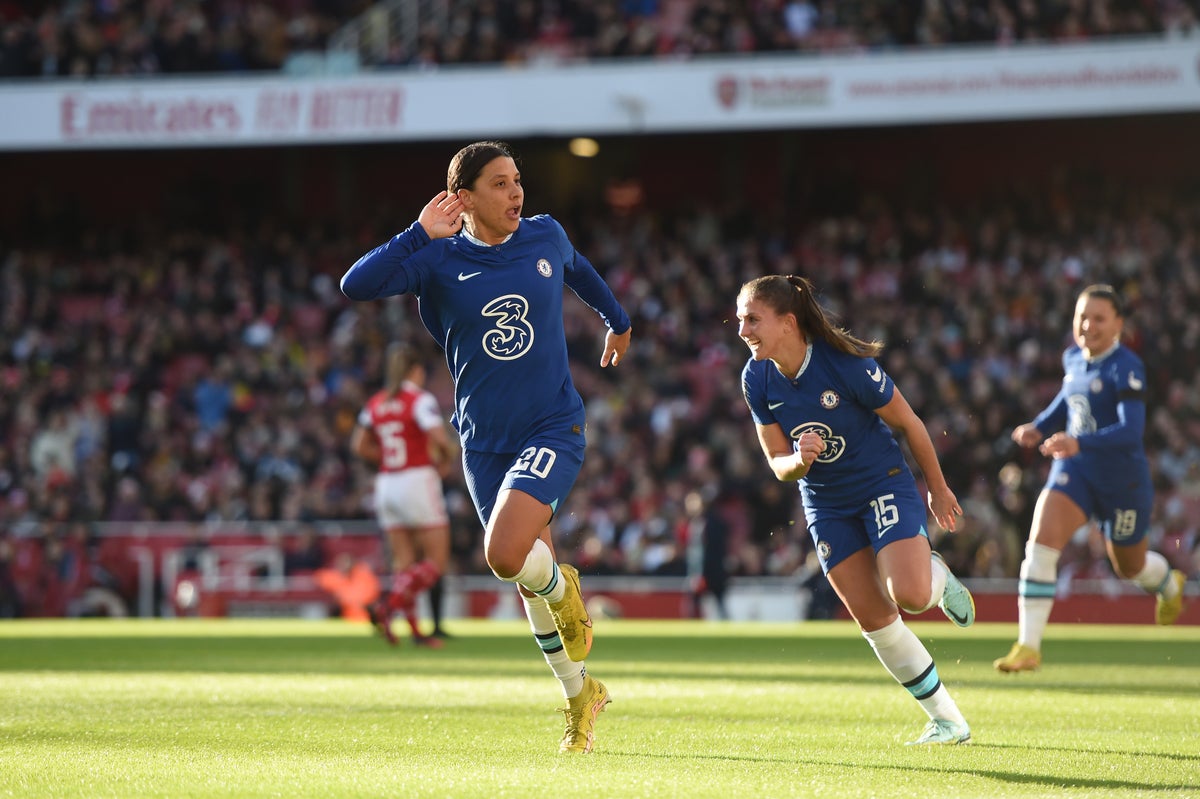 You can’t keep Sam Kerr quiet for long. It is often in the biggest of games where Chelsea’s striker makes her most decisive interventions and in the Women’s Super League, those don’t come much bigger than against Arsenal and in front of over 45,000 at the Emirates. The Australian’s header just short of the 90th minute rescued a point for the WSL defending champions, which maintains their three-point advantage over Arsenal in the title race.

Chelsea had been dominated by Arsenal for long periods and the hosts will regret not finishing off Emma Hayes’ side when they were on top. Although Arsenal’s opener was hugely controversial, the hosts created the majority of the chances at the Emirates and had the edge over their London rivals on the balance of play. But as Arsenal dropped deeper, holding on to what would have been a crucial victory, Jelena Cankovic produced an outstanding cross and Kerr struck to salvage a draw.

Chelsea were aggrieved at referee Emily Heaslip’s decision to award a penalty for Niamh Charles’ challenge on Caitlin Foord, which was clearly outside of the box, but they instead finished the afternoon celebrating a precious point. After Kim Little stepped up to finally send Chelsea goalkeeper Zecira Musovic the wrong way, just as it was beginning to look like Arsenal would find no way through, there was no question that the Gunners had taken a deserved lead.

But without Beth Mead and Vivianne Miedema, both out for the season due to ruptured anterior cruciate ligament injuries, they instead are made to regret wasteful finishing. There was a sense of unease rising at the Emirates as opportunities continued to be spurned into the second half, and Kerr’s late intervention proved why. Arsenal’s shots on target kept finding Musovic and they were missing the clinical finishing touch Mead and Miedema so often provide.

The relief, then, when Heaslip pointed to the spot following Charles’ barge on Foord and Little confidently placed her penalty into the far corner, was palpable. Until that point, Chelsea were hesitant and well below their best. They were swarmed in the first half and struggled to respond to the controversial penalty decision. Lauren James had been their lone bright spark but faded, while Guro Reiten was kept quiet. Sophie Ingle fired wide, while Magdalena Eriksson’s header from close range was their first effort on target, but was gathered easily by Manuela Zinsberger. Kerr, though, could not be contained.

Arsenal had looked more likely to double their advantage. Foord cut inside and tested Musovic, before Steph Catley’s drifting cross had to be helped onto the crossbar. Lina Hurtig’s header from close range was also kept out, while in the first half alone Arsenal could have been out of sight.

In an unusually uncertain opening period from Chelsea, Arsenal pounced on early sloppiness in the Chelsea defence but failed to trouble Musovic. Hurtig had the best of the flurry of chances after Stina Blackstenius dispossessed Erin Cuthbert in midfield, but the forward’s shot was tame and easily gathered. Foord and Frida Maanum also fired straight at Musovic, after Charles and then Kadeisha Buchanan were too easily beaten.

This was above all a must-not lose for Arsenal but they will regret wasting a glorious chance to take advantage. Chelsea came into this in relentless form and with an imperious defensive record, yet the first WSL fixture after the Christmas break seemed to catch the visitors cold. James carried Chelsea’s threat on the right wing and at first looked to have the beating of Arsenal whenever she got on the ball. The first warning for Arsenal came after just six minutes, as the 21-year-old shrugged off Rafaelle on the halfway line before skipping past Lia Walti. From there, she drove inside at Kim Little before sending a shot just past the far post.

For the most part, that was it. But then Cankovic picked up the ball on the right wing, drifted inside and picked out Kerr at the back post. Kerr, as she so often does, had the final say.