HOLLYWOOD stars Ryan Reynolds and Rob McElhenney have completed their takeover of Wrexham.

The duo took full control from the Wrexham Supporters Trust — and renamed their Twitter accounts ‘Wryan’ and ‘Wrob’.

“We’re toasting with a limited-edition bottle of @AviationGin and I am rebranding as Wrob.”

They are making a £2million investment, having opened talks with the National League club in September.

Deadpool actor Reynolds and and pal McElhenney, both 43, said in a statement: “It is a special day for the two of us to become the latest stewards in the long and storied history of Wrexham AFC.”

“Together with the players, the staff, the fans, and the local community, we can now pursue our goal to grow the team and return it to the EFL in front of increased attendances, and in an improved stadium, while making a positive difference to the wider community in Wrexham.

“Wrexham AFC is only in a position to thrive because of the incredible efforts of the Wrexham Supporters Trust.

“Their members are a fitting reflection of the integrity and spirit of the town and they will always have an important role at the club.”

They added that funds “will be immediately channelled into new initiatives at the Racecourse Community Foundation, including £50,000 to enhance the women’s football programme and increase participation at all levels.

“Alongside this, first-team player identification will be a priority, so the club is in the best possible position for the summer transfer window”.

Contracts were exchanged in January but McElhenney and Reynolds already donated money to strengthen Wrexham’s squad.

That was before the transfer deadline and all while waiting for the takeover to be approved by the FCA.

Former Liverpool chief executive Peter Moore has taken on an informal role advising the actors and said that they are ‘in it for the long term’.

Wrexham beat Altrincham on Tuesday night to go seventh in the fifth tier of the English football, the final play-off spot. 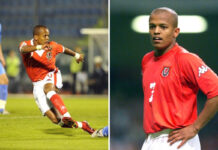 Who is ITV pundit Robert Earnshaw? What clubs did he play for?