ROMAN ABRAMOVICH has defended his record for sacking Chelsea managers.

The Russian billionaire sacked Frank Lampard in January – the 10th manager to get the axe in his 18-year reign at Stamford Bridge.

Thomas Tuchel replaced club legend Lampard and has guided the Blues back into the top four of the Premier League, as well as the Champions League last-eight for the first time in seven years.

And Abramovich, in a rare interview with Forbes, insists he has no issues over his revolving door policy.

He said: “I think we are pragmatic in our choices. And we are comfortable making the right changes at the right time to ensure we can achieve our long-term ambitions.

“I hope it also says something about the clarity of the long-term ambition of the club.

“Those who join understand the objectives both on the pitch, as well as the wider positive role the club plays in the community.”

Despite the managerial changes, Chelsea have won five Premier League titles, the Champions League, two Europa Leagues, five FA Cups and the League Cup three times since Abramovich bought the club in 2003 – and his desire to keep winning silverware shows no signs of slowing down.

Abramovich added: “The trophies speak for themselves and show what we as a club have been able to achieve over these years.

“And it’s my goal for us to keep winning trophies going forward and build for the future.”

Abramovich has not been to a Chelsea game at Stamford Bridge for over two years and can no longer work in England after deciding not to renew his visa.

But he reiterated his commitment to the club, adding: “The ambitions are as true now as they were when I first became owner and I hope that can be seen through the work we have been doing on and off the pitch over the last 17 years.

“Chelsea has a very rich history, and I feel extremely fortunate to play a part in that.

“The club was here before me, and will be here after me, but my job is to ensure we are as successful as we can be today, as well as build for the future.

“That’s why the success of our academy at Cobham [training ground] is so important to me.”

Abramovich also spoke out on the increase in racial abuse towards players.

Chelsea and England defender Reece James has been one of many Prem stars who have been subjected to vile abuse in the past few months.

He said: “Racism, antisemitism, this is all the same type of evil & should have no place on our world at this day and age.

“Every time I get sent examples of racist abuse that our players face, I am shocked.” 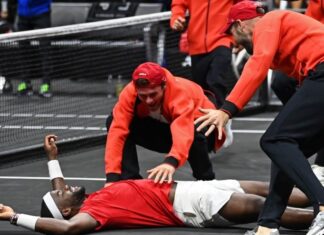