Manchester United have confirmed a group of protestors gained access to the club’s training ground this morning.

Manager Ole Gunnar Solskjaer spoke to those who found their way in, as the backlash against the Old Trafford hierarchy continues.

Fans remain unhappy after United were one of six Premier League clubs to sign up to the European Super League – before eventually withdrawing from the breakaway competition.

The Real Madrid president described the reaction to the breakaway league as an “avalanche” of aggression as if “we had launched an atomic bomb”. 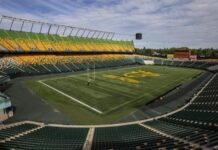