The first of the All-Ireland Schools League finals were played out at the National Basketball Arena, with three champions being crowned. 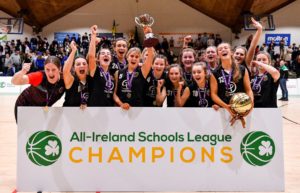 In the U19 C Girls Schools League final, it was Pipers Hill Naas who took the victory, beating St. Finians Swords by five points, 47-42. A strong opening half from the Kildare side had them ahead 29-15 going into the second half. St. Finians fought hard to pull it back, outscoring Pipers Hill by four points in both second-half quarters, but it wasn’t enough to overcome the lead built by Pipers Hill.

MVP in the game was Pipers Hill’s Niamh Farrelly, who was also top scorer with 18 points. Her teammate Stephanie Nnabuihe was a close contender for MVP, strong in rebounds under the basket, she also scored well with 16 points. Next top scorer for Pipers Hill Naas was Kate O’Neill with 6 points. For St. Finians Swords, it was Sophie Staunton and Stacy Walsh who led the offense, picking up 17 points each, with Lara Walsh next highest at 7 points from the game.

It was a dramatic end to the U16 B Schools League final, with a single point separating the finalists at the end, with IS Killorglin pipping Gaelcholáiste Chiarraí by one, 41-40. The teams where evenly matched throughout the game, with the lead changing multiple times. While Gaelcholáiste Chiarraí had the lead at the end of the half, 22-19, the teams were all square heading into the final quarter, at 32 points each. IS Killorglin defended well in the second half to hamper the attacking efforts of Gaelcholáiste Chiarraí, and held on until the end to earn the victory by a point. Emily O’Sullivan had a standout performance for IS Killorglin, as she picked up 11 points for her side, earning MVP in the process. Her teammates Sian Corkery (8 points) and Seodhla O’Donovan (7 points) also shot well in the game. Top scorers for Gaelcholáiste Chiarraí were captain Rachel Ní Chriodáin (14 points), Sorcha Ní Chathasaigh (13 points) and Sarah Ní Scannláin (7 points).

Canada and United States to clash in World Cup qualifier in Hamilton on Sunday...