Four-time Grand Slam champion Naomi Osaka was reduced to tears by a heckler Saturday on the way to a 6-0, 6-4 second-round loss to Veronika Kudermetova at Indian Wells.

Japan’s Osaka, ranked 78th in the world after her third-round exit at the Australian Open, was rocked early in the first set when someone in the crowd yelled “Naomi, you suck.”

She was unable to convince the chair umpire to take action and at 0-3 down her emotions spilled over.

Osaka quickly pulled herself together and resumed the match, but even though she raised her game in the second set she could find no answer for Kudermetova, a finalist this year in the Melbourne Summer Set and in Dubai. 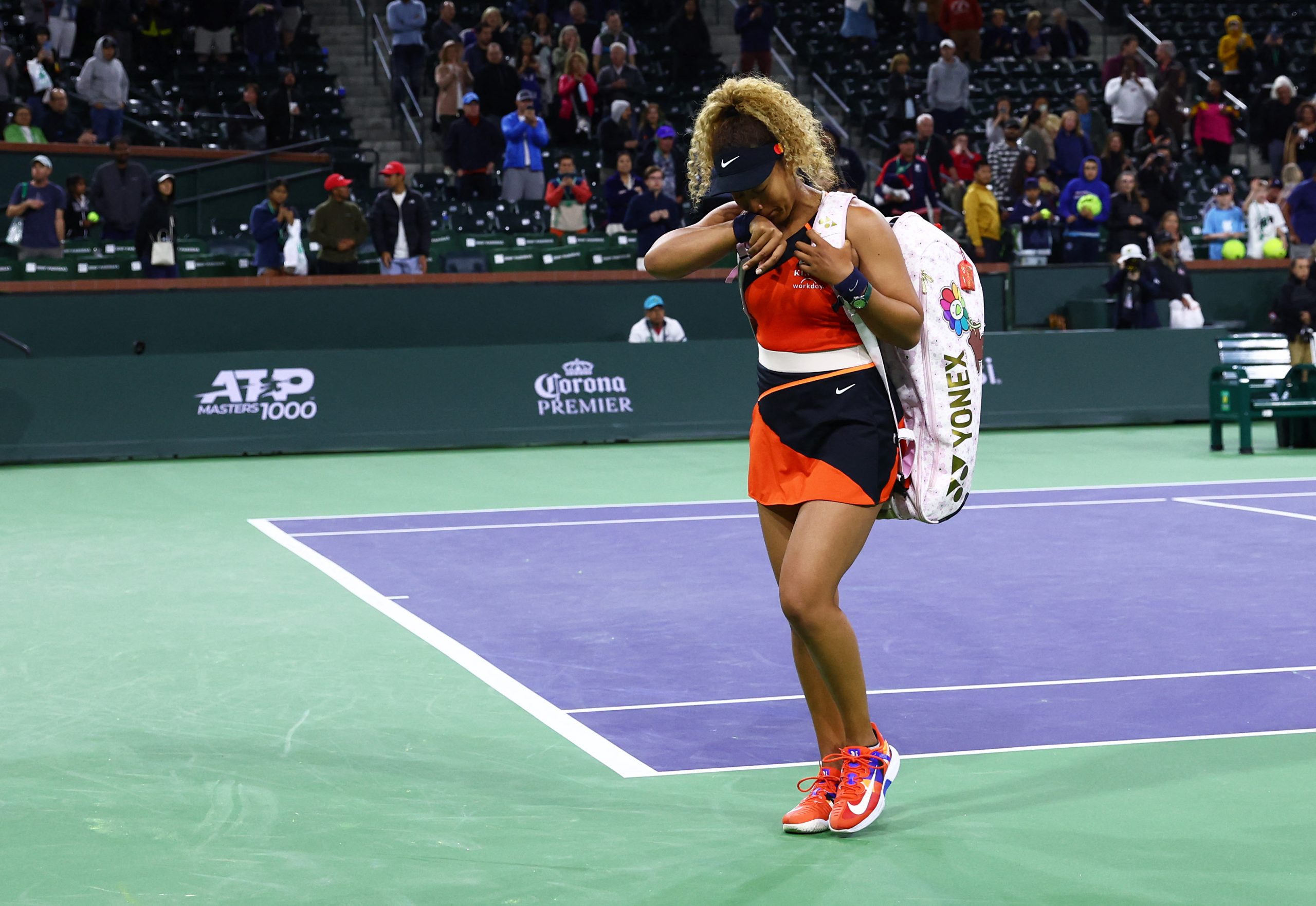 INDIAN WELLS, CALIFORNIA – MARCH 12: Naomi Osaka of Japan walks off court after her straight sets defeat against Veronika Kudermetova of Russia in their second round match on Day 6 of the BNP Paribas Open at the Indian Wells Tennis Garden on March 12, 2022 in Indian Wells, California. Clive Brunskill/Getty Images/AFP (Photo by CLIVE BRUNSKILL / GETTY IMAGES NORTH AMERICA / Getty Images via AFP)

Osaka put athlete mental health in the spotlight in a difficult 2021 in which she revealed she had suffered depression.

But speaking on the court after the match she said it wasn’t that she found the comment so hurtful that she was upset, but because it reminded her of Venus and Serena Williams being heckled at Indian Wells in 2001.

“To be honest I feel like I’ve been heckled before it didn’t really bother me,” she said.

“But, like, I’ve watched a video of Venus and Serena being heckled here.

“If you’ve never watched it you should watch it,” she added, tearing up again before she congratulated Kudermetova on the win and departed the court.

Kudermetova, who had been looking forward to her first career meeting with Osaka, said she didn’t know what the spectator said, she just knew her opponent was upset.

“I didn’t hear what the lady say because I really was so focused on my game, on my serve game, I didn’t understand what she say.

“But after that moment, I saw that Naomi, she start to cry. I don’t understand what’s happened.”

With Osaka’s defeat, the women’s field in the prestigious WTA and ATP Masters hardcourt tournament lost another big name.

Aryna Sabalenka, at number three the highest-ranked woman in the field, crashed out of her opening match as Italian Jasmine Paolini rallied for a 2-6, 6-3, 6-3 triumph.

Sabalenka was seeded second in a tournament missing both world number one Ashleigh Barty and second-ranked Barbora Krejcikova.

Both were late withdrawals, Barty saying she hadn’t had time to prepare after her Australian Open triumph and Krejcikova with an elbow injury.

Sabalenka got off to a strong start against the 46th-ranked Italian, but Paolini was able to capitalize on her struggles on serve that included 10 double faults.

Paolini admitted that after dropping the first set by a large margin, victory was the last thing on her mind.

“But then, point by point I started to believe it.”

– Defending champ Badosa wins –
Sabalenka’s exit opens things up for former world number one Victoria Azarenka, seeded 13th, and sixth seed Maria Sakkari of Greece — both in the same quarter of the draw.

Sakkari opened her campaign with a 6-3, 7-5 victory over Czech Katerina Siniakova.

Spain’s Paula Badosa kicked off her title defense with a 6-2, 7-6 (7/4) victory over Czech Tereza Martincova.

Badosa had lost three prior meetings with Martincova, although all had come before the Spaniard launched herself into the top 10 with her Indian Wells victory in October when a pandemic delay shifted the event from its usual March slot.

US Open finalist Leylah Fernandez of Canada saved four match points in the second set and won a tiebreaker to force a third before Amanda Anisimova retired because of illness.

Chelsea CAN sell tickets for Champions League and FA Cup games and get £30m...