Rafael Nadal yesterday outlasted Stefanos Tsitsipas, 6/4; 6/7 (6); 7/5 to win the Barcelona Open, in a match for the records. It is the 87th title for 34-year-old Spaniard, who ended the 17- straight sets clay-court record of the 22-year-old Greek star.

In the first set, Tsitsipas broke Nadal’s serve in the third game and consolidated to 3-1. Nadal saved three break points before taking the fifth game that lasted ten minutes. Nadal broke back in the eighth game and held to lead 5-4. Serving to save the set, Tsitsipas opened with a double fault while his forehand shot skipped the net and landed out for the set after 59 minutes.

Nadal dropped his serve in the third game of the second set but he broke his opponent’s serve to level three-all. Serving at 4-5, Tsitsipas faced two match points at 15-40. He cancelled one with an overhead smash and hit a deft volley to deuce before leveling five-all. Nadal cancelled two break threats to hold the 11th game but Tsitsipas leveled six-all.

In the tiebreaker, Nadal took the first point on his serve and Tsitsipas held his next two points. Nadal held two service points and got a mini-service break to lead 4-2. After change of ends, Tsitsipas reeled off four straight points to reach set point. However Nadal leveled six-all. After second change of ends, Nadal committed a crucial double fault Tsitsipas hit a serve that Nadal returned into net to lose the second set.

In the third set, Tsitsipas lost the first point but clinched the game with an ace.

Tsitsipas won the ninth game with the help of a net-cord ball that landed wide. Serving to save the match, Nadal held first point of game but missed an easy sitter at net for 15-all. A titanic effort secured 30-15 for Nadal but a deep forehand led to 3-30. In the crucial next point, Nadal had an easy ball that he netted to face match point. He missed the first serve but a net cord gave him an easy put-away for deuce.

Tsitsipas hit a backhand wide to give Nadal game point. A Nadal’s overhead smash was returned and he missed the next shot, but he leveled with a deft drop volley that spun away to the sideline. After missing an easy ball to get leveled 15-all, Tsitsipas double-faulted to 15-40 and Nadal reached game point with a drop shot. Tsitsipas cancelled both but eventually lost the eleventh game. Serving for the match, Nadal led 30-0 but missed a forehand and hit a double fault for 30-40 and deuce. A deft drop shot gave him a game point and he clinched the match when a Tsitsipas forehand sailed over the sideline. 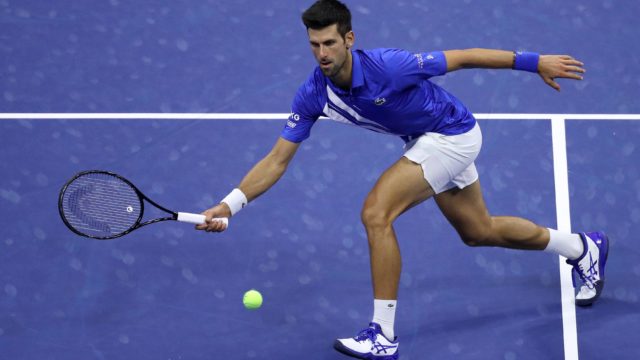