MIKEL ARTETA warned Mesut Ozil he must deliver his pre-lockdown form before being picked again.

Ozil was shocked to be left out of Arsenal’s 20-man squad for Wednesday’s 3-0 defeat at Manchester City.

But boss Arteta hinted the German had not shown enough in training to even make the subs’ bench.

He said: “I have been very open with Mesut from day one and since I joined the club.

“I thought he was fit, willing and wanted to perform at the level he can.

“The moment I see he’s ready to do that again I will treat him like anybody else.

“I am the first one that wants Mesut at his best and I am going to put him on the pitch when I think he can give me that.”

Ozil, 31, who is about to enter the final year of his £350,000-a-week contract, posted a picture of him clutching the Arsenal badge on social media yesterday with the defiant message ‘No matter what’.

But Arteta denied there had been a bust-up with the club’s highest-paid player and added: “He was very good with me. There were no issues at all.

“Our conversation was completely fine, honest and clear.”

Yet Arteta will not have been impressed by Ozil’s refusal to take the 12½ per cent pay cut which virtually all the squad have been forced to accept as a result of the Covid-19 shutdown.

He said: “That was an incredible gesture of unity and commitment from everybody at the club. I am very proud of that.”

Arteta revealed he left David Luiz out of the starting line-up against City because of the uncertainty over his future.

The Brazilian defender, 33, is out of contract at the end of this month and the club have yet to trigger a one-year extension.

Arteta added: “David has been very direct with us and that’s what I value from him. But we need to be fair on him.”

Pablo Mari is set to miss the rest of the season after the on-loan Flamengo defender, 26, hurt ankle ligaments at City. 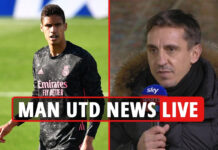 sportslatestnews - April 21, 2021
0
A teak tough defender who will be hard to replace, that’s one of the many descriptions of Kerrys Peter Crowley who has called...