RAY CLARKE co-owns a hotel called The George and Dragon — which seems  appropriate for the only English hero in Ajax history.

The former Tottenham trainee, 67, did enough in just one season in Amsterdam to win the hearts of the fans — and the respect of Johan Cruyff.

In the 41 years since the Hackney-born striker’s goals helped seal a Dutch Double, no other Englishman has worn the famous white-and-red shirt.

Speaking of how h became a legend at Ajax, he said: “I wasn’t a traditional Dutch type of player and mentally, physically, tactically you had to be spot on.

“But I thought I cracked it. I fitted the system, I was accepted by the fans.

“They used to stick things up behind the goal. ‘Ray Clarke, King of Ajax’ — that kind of stuff.

“To be put into the same category as people like Cruyff and Ruud Krol and Johnny Rep was a bit humbling really.”

Clarke had taken the scenic route to Amsterdam.

A prolific scorer in Spurs’ junior ranks, he played with Graeme Souness and Steve Perryman in the team that won the 1970 FA Youth Cup.

But with club legends Martin Chivers and Alan Gilzean ahead of him, he made just one substitute appearance before  leaving for Swindon in 1973 after making only one senior appearance. He then made his name by firing Mansfield to the Fourth Division title in 1975.

And  the following year  Clarke found himself in Holland.

I used to go round his house. The trouble is, he had two Dobermanns and I had to wait until he put them away!

Clarke on Cruyff – and his dogs

Wolves boss Bill McGarry had turned down the manager’s job at Sparta Rotterdam but recommended Clarke to them.

Ajax were still ahead of their time in some respects.

On top of the highly technical and demanding training, Clarke was bemused but soon grateful to find himself learning from Cees Koppelaar.

The former top-level runner combined his work at Ajax with being a coach to Holland’s Olympic athlete and taught Clarke not only how to run properly but also how to use a personalised weights programme to build his explosiveness.

But on the pitch, although Ajax had Dutch World Cup skipper Krol and goalkeeper Piet Schrijvers, they were not the ‘Total Football’ force that had ruled Holland and won three European Cups with Cruyff in the team.

The return of the great man to Amsterdam ahead of his testimonial match in autumn 1978 was inspirational —  especially to Clarke.

He said: “Cruyff trained with us for six weeks. He talked to me about movement, getting into certain positions, seeing things a little bit earlier.

“I used to go round his house. The trouble is, he had two Dobermanns and I had to wait until he put them away!

“It gave me amazing confidence, more than anything.

“Someone like him, taking the time and trouble… he made me feel accepted as an Ajax player.”

They brought a sack of 400 letters saying; ‘Why did you leave Ajax?’ I told them the truth.

Clarke on his Ajax exit

Clarke’s self-belief grew as the season went on, thanks to the confident mentality of the Dutch people as a whole and some of the other characters he came across at Ajax.

On one occasion, the Englishman was playing down his ability to reporters after scoring five goals in two games.

But he found himself pulled aside by assistant manager Bobby Haarms, a club legend who had worked under Rinus Michels.

Clarke said: “He said: ‘If I hear you talk like that again, I will have you in training every single day, morning and afternoon.

“‘When people ask you how you played, you tell them you are the best striker in Holland. You don’t say you did all right.’

“The Dutch have got his little bit of arrogance. It’s a fine line.

“Before the cup final, Krol asked me if I was nervous. I said yes. He said: ‘We’ve not come all this way to be beaten – remember that.’

“You walk down the tunnel and you’re 10 feet tall.”

Why Ajax are the worlds greatest club in Clarke’s mind

The fans, especially the ‘F-Side’ ultras, took Clarke to their hearts.

It was not just the number of goals —  38 in 43 appearances — but their  significance.

Clarke scored the penalty equaliser in that Dutch Cup final against FC Twente, then notched the first and made the  second in the 3-0 replay win.

And with Ajax, needing a point to seal the title, trailing AZ Alkmaar 1-0 with barely five minutes of their penultimate league game to go, Clarke headed in a Frank Arnesen cross to send the De Meer Stadium into raptures.

Fans carried Clarke off the pitch on their shoulders — but his and their  jubilation did not last long.

Clarke was given an improved contract but then an intermediary informed him he was being sold to Club Brugge to fund rebuilding of the Ajax squad. Cruyff branded the Ajax board of running the club like “shopkeepers” for selling Clarke and he was not the only one upset.

“Then three of them drove all the way from Amsterdam to Bruges, knocked on my door and said ‘Can we come to talk to you?’

“They brought a sack of 400 letters saying; ‘Why did you leave Ajax?’ I told them the truth.”

The biggest impact, of course, was on Clarke himself.

He said: “When there’s a downer, normally I’m OK.

“But if I’m honest with myself, it was really disappointing and it kicked on to Brugge.”

Things did not start well in Belgium and when wife, Cindy, was diagnosed with a heart problem, they returned to England.

Clarke had a good 1979-80 season at Brighton, where former Tottenham team-mate Alan Mullery was boss. But shortly after a move to Newcastle, hip problems forced him to retire at the age of only 28.

Like many footballers of his era, he went into the pub and hotel trade.

A chance meeting with old friend Souness led to a 20-year career in coaching and scouting for a number of top clubs that ended in 2015. Clarke is now focusing on his new partnership with renowned chef Arnaud Stevens and insists he will be happy whether Ajax or  Tottenham reach the Champions League final.

But earlier this month he was back in Amsterdam for a reunion and behind the bar in deepest Buckinghamshire, there is an Ajax pennant.

“There are other great teams in the world of football.

“They send me all sorts of things. There’s a magazine that comes out. 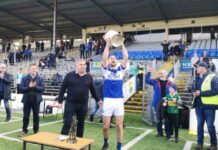 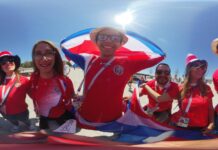 What language do they speak in Costa Rica, when were they... 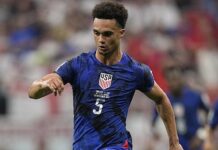 Inter Milan are planning a ‘£20 million bid’ for Fulham left... 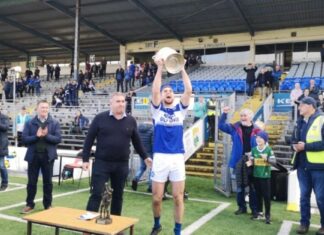 What language do they speak in Costa Rica, when were they...

Inter Milan are planning a ‘£20 million bid’ for Fulham left...