IAN WRIGHT praised the leadership qualities in the Arsenal squad after they won 1-0 at Aston Villa.

The result cements Arsenal’s place in the top four, putting them four points ahead of Manchester United and West Ham and six ahead of Tottenham.

It was another convincing performance from Mikel Arteta’s side but Wright was more impressed with the leadership on show.

He picked out several players who have been leaders for the Gunners this season, suggesting they have shut up a few pundits.

Wright said to DAZN: “A lot of pundits have been very joyous in talking about Arsenal and how weak they are, [having] no leaders.

“Look at them now… this Arsenal team are a young side, we’re starting to see characters grow in the side. 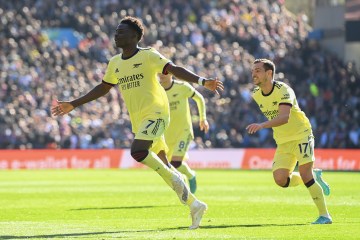 “We’re talking about five, six, seven, eight players are getting an eight out of 10 every week. That’s what you have to do.

“And then it’s up to the owners and the manager and the recruitment to bolt on the kind of players that are going to fit in the squad and continue to help them improve.”

Arsenal were dealt a big blow at Villa Park with Gabriel Martinelli and Aaron Ramsey absent through injury, but still came through unscathed.

Although the players have shown leadership qualities on the pitch, former manager Arsene Wenger believes it comes from the top.

He praised Arteta for recapturing the spirit of the club, saying the players have bought into his ideas.

Arsenal can now rest up over the international break ahead of an action-packed few weeks which sees them take on two top four rivals in United and West Ham, as well as Chelsea.