LIVERPOOL transfer target Darwin Nunez has hinted that he could be on his way to Anfield… by liking Roberto Firmino’s Instagram post.

The Reds are reported to have agreed personal terms with Benfica hotshot Nunez ahead of a summer transfer.

Liverpool are understood to have offered around £86million for the forward but Manchester United are currently trying to hijack the deal.

Jurgen Klopp is said to have held private discussions with Nunez’s representatives who have made it clear he prefers a move to Merseyside.

And Nunez himself may have given the game away too after liking Firmino’s Instagram upload from Thursday evening.

The Uruguayan ace liked the snaps Firmino, 30, posted of himself helping deliver a sermon while away on his summer holiday. 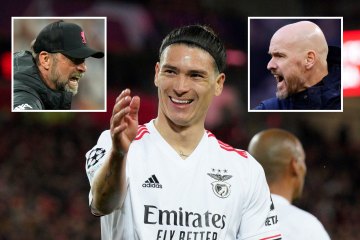 The striker looked emotional as he visited Manah Church in the Brazilian city of Maceio alongside his wife Larissa Pereira, 29.

Anfield fan favourite Firmino stood next to his wife at the Christian church before getting up on stage to help deliver a sermon.

He read off his phone as another church-goer played the guitar behind him.

Manah Church’s official website lists Firmino and his wife Larissa as missionaries of the church in the UK.

The couple married in 2017 and are currently holidaying in Brazil, their home country.

Firmino is a devout Christian, and in 2020 he was filmed being baptised by team-mate and close friend Alisson Becker.