Tomori, 21, barely put a foot wrong all game and was excellent defensively alongside Cesar Azpilicueta and Kurt Zouma in a back three before switching to a four in the second half.

The academy product even showed plenty going forward, bringing the ball out of defence and setting up Tammy Abraham’s opener in the 2-1 win with a well-placed delivery from deep.

And his manager was unsurprisingly full of praise for the youngster’s masterclass, giving Tomori a special mention out of the three defenders.

Lampard said: “Tomori was outstanding all game. He made one mistake which thankfully Kepa retrieved.”

“Tomori’s individual performances and where he is going, he has to keep on with that.

“It was a really tough game for any defender there and I thought we defended well.”

Everything he did today defensively I thought he was perfect. His tenacity, his anticipation, his willingness to step out and make quick decisions to intercept.

Former Manchester United and England centre-back Ferdinand knows a thing or two about good defending – and he saw that in abundance from Tomori tonight.

He gushed: “Huge talent. I think tactically Frank has got an A+ today because the pace on the counter attack from the Lille front men was there for all to see.

“That was the best defender on the pitch actually setting up the first goal.

“Everything he did today defensively I thought he was perfect.

“His tenacity, his anticipation, his willingness to step out and make quick decisions to intercept.

“He notices the danger, he’s running past people to get back to make an effort for his team. That’s what you want to see from young players.

🎯 The pass from Tomori
🔥 The touch from Abraham.

A goal made in the Chelsea academy. The perfect birthday present for Chelsea’s number nine. pic.twitter.com/xoOl7Pi2b4

“The best bit is one-v-one. He’s saying, ‘Go on, you try and run past me.’ That’s what you want from your centre-half.”

And ex-Blues midfielder Joe Cole also chipped in with his own adulation for Tomori, who is enjoying his first season in the Chelsea first team after spending last year on loan with Lampard at Derby.

Cole added: “He was different class tonight. He’s been Chelsea’s best performer for the last two or three games. Like a young Rio Ferdinand.” 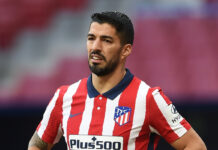 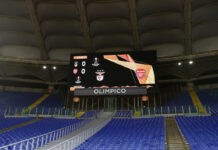 Do away goals count when Europa League games are at neutral venues? Full Uefa 2020/21 rules

Neil Lennon to LEAVE Celtic in next 24hrs with Hoops 18... 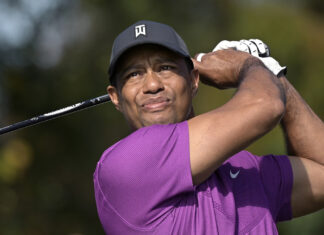 sportslatestnews - February 24, 2021
0
Tiger Woods watches his tee shot on the first hole during...

Neil Lennon to LEAVE Celtic in next 24hrs with Hoops 18...