JARROD BOWEN celebrated his pair of goals by paying tribute to his pregnant girlfriend Dani Dyer.

Dani revealed her bare bump for the first time on social media this morning.

Then hours later her man got on the scoresheet.

Bowen managed to stay onside and poked home to open the scoring in the must-win clash against Everton at the London Stadium.

And he marked his sixth goal of the season by grabbing the ball and putting it up his shirt then sucking his two thumbs – in reference to the two new babies on the way. 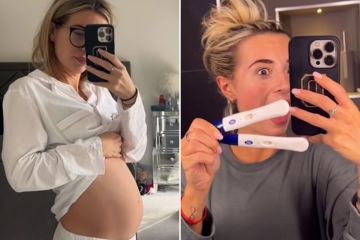 Bowen scored again just minutes later as he fired in from close range to heap more pressure on Frank Lampard as Toffees boss.

But this time he went back to his regular celebration and pointed to his ear as he ran off in delight.

Dani thrilled fans when she showed off bump in a heart-warming video montage of her pregnancy journey so far.

In the clip shared to TikTok, the reality star also displayed the moment she found out she was expecting twins.

Dani announced the big news yesterday, telling her followers: “We have been keeping a little secret… Our little TWINS ♡ ♡

“So excited to meet our babies and watch Santi be the best big brother.

“The biggest surprise of our lives but feeling SO blessed.. our family is getting a lot bigger and we can’t wait.”

She shares son Santiago, one, with former jailbird Sammy Kimmence, who was recently released from prison.

A source told The Sun: “Dani had told her inner circle towards the end of last year but everyone was sworn to secrecy.

“Both she and Jarrod were overjoyed to discover she was pregnant – finding it was twins is the cherry on the cake. Everyone is so excited.”

The pair have been inseparable since, often posting loved-up pictures from trips together, including one to Disneyland Paris in November.

The TV star has even moved in with boyfriend Jarrod after putting her own £750,000 home on the rental market. 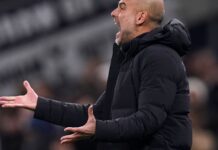