England‘s stars were presented with personalised packages by Prince William before jetting off to Qatar as they bid to win the World Cup for the first time in 56 years.

The 26 players chosen to represent the Three Lions joined up as a group before the tournament on Monday, and were given their squad numbers by manager Gareth Southgate.

Prince William arrived to greet the players on Monday evening and offered some final words of encouragement before giving all the squad members a package which told them the number of players that have previously worn their shirt number, and contained an inspirational message from Southgate.

Harry Maguire posted on Twitter after receiving his package, alongside the caption: ‘Honoured to be presented with the famous no.6 shirt by Prince William.’

Maguire’s package highlighted that only 11 players have previously worn the No 6 on the biggest stage, including World Cup-winning captain Bobby Moore, Southgate, and Sol Campbell.

‘Wear your shirt with pride and embrace the opportunity to make history,’ Southgate wrote. 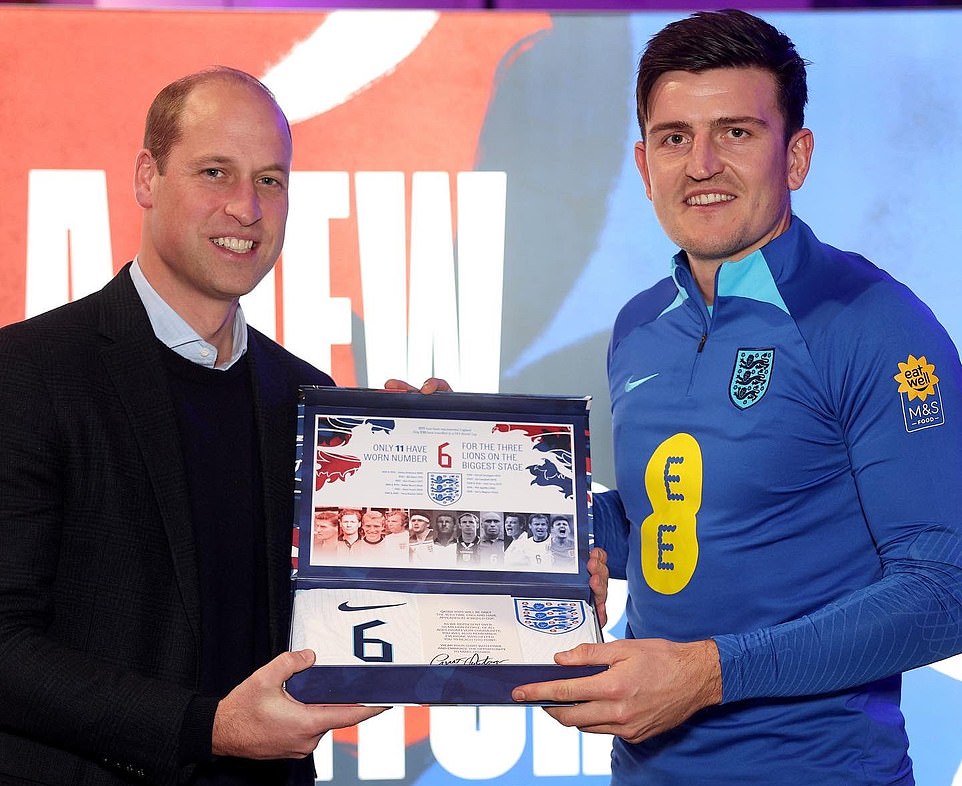 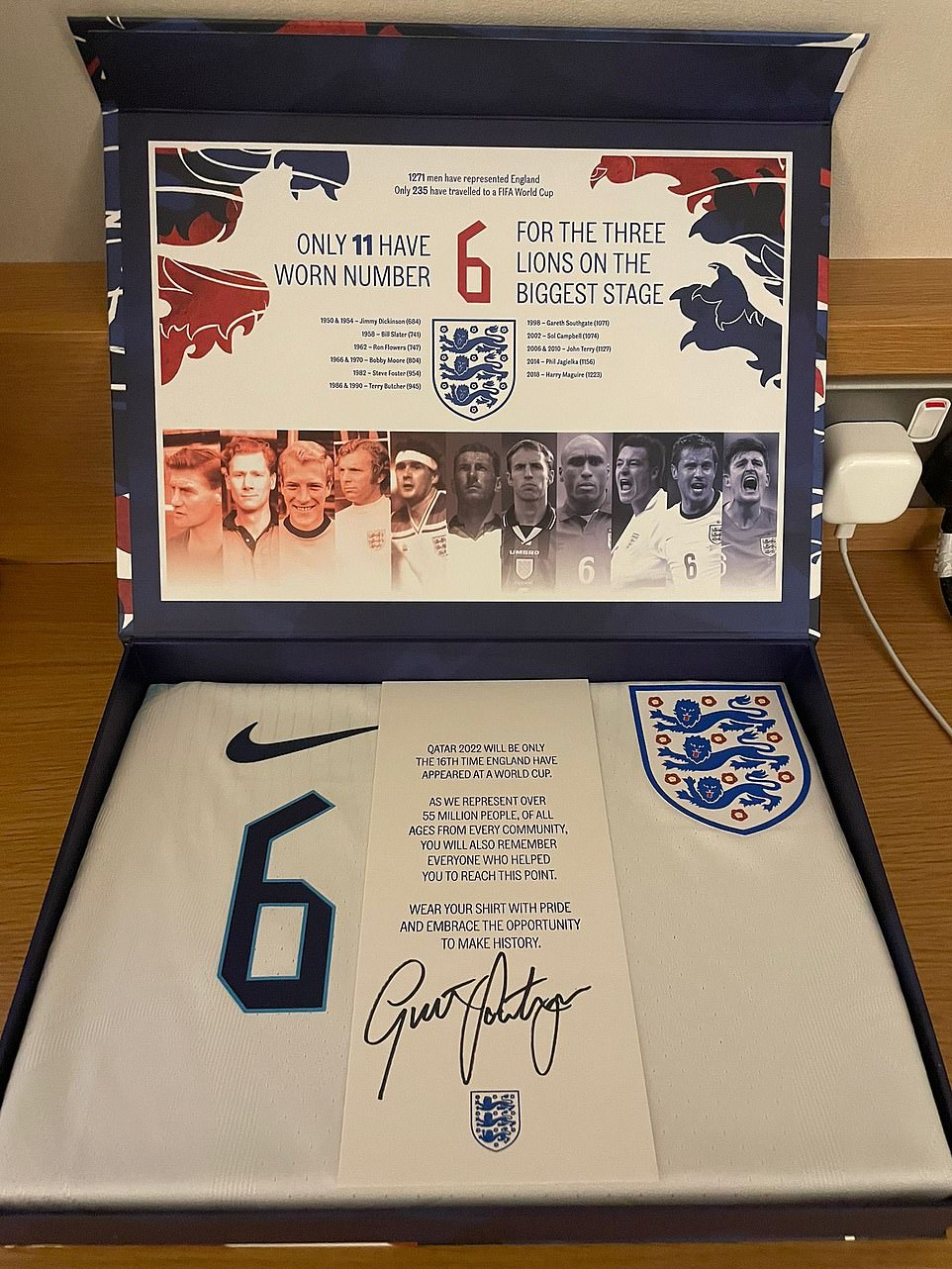 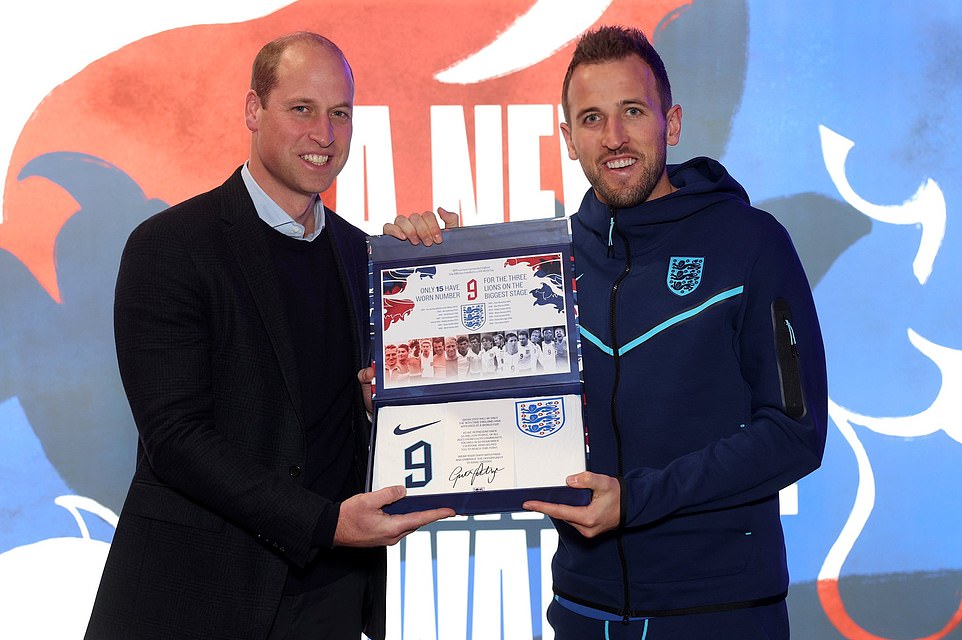 England captain Harry Kane also posted on Twitter of himself with Prince William, alongside the caption ‘Pride in the shirt’

‘Qatar 2022 will be only the 16th time England have appeared at a World Cup.

‘As we represent over 55 million people, of all ages from every community, you will also remember everyone who helped you to reach this point.

‘Wear your shirt with pride and embrace the opportunity to make history.’

England captain Harry Kane also posted an image of his package being handed to him by Prince William, with the tweet: ‘Pride in the shirt’.

Prince William had told the players: ‘What you and Gareth have built here is something special, that’s clear to see.

‘I’m really here to point out the rest of the country is behind you, we’re all rooting for you. Enjoy it.’

Kane, who won the Golden Boot at the last World Cup in 2018, will follow in the footsteps of England greats such as Bobby Charlton, Alan Shearer and Wayne Rooney by wearing the No 9.

Jack Grealish will wear the famous No 7 shirt in Qatar, previously donned by David Beckham, and he was pictured laughing and joking with Prince William at St George’s Park.

Bukayo Saka is set to push for a starting berth after impressing at Arsenal this term, and he has been given the No 17 shirt.

Saka started three games at last year’s Euros, but missed the decisive penalty in England’s heartbreaking shootout defeat against Italy in the final.

Kyle Walker will arrive in Qatar having not featured for Manchester City since early October after undergoing groin surgery.

However, Southgate has shown faith in him after he starred in Russia four years ago, and was named in UEFA’s team of the tournament at last year’s Euros. 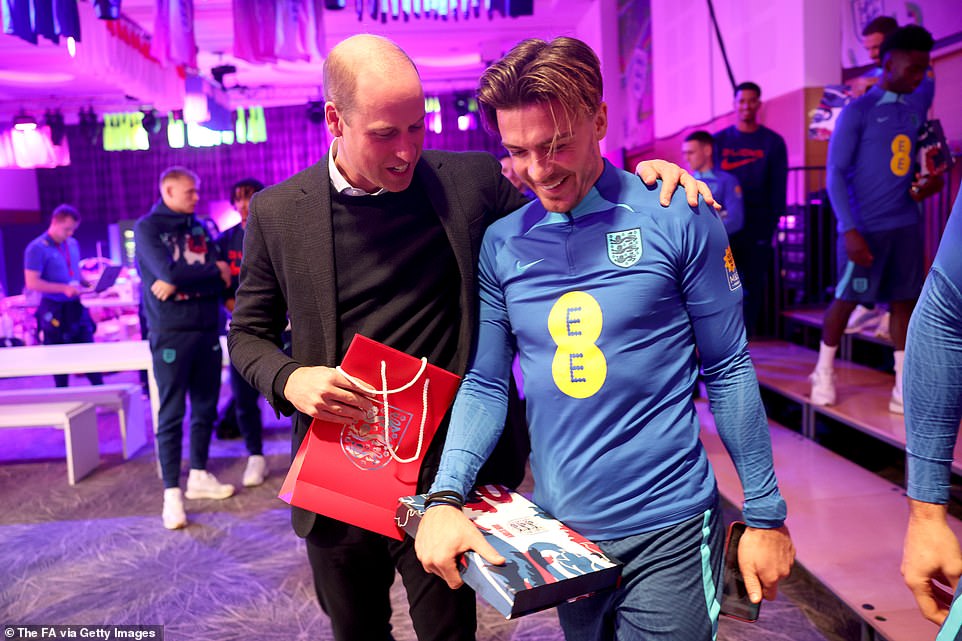 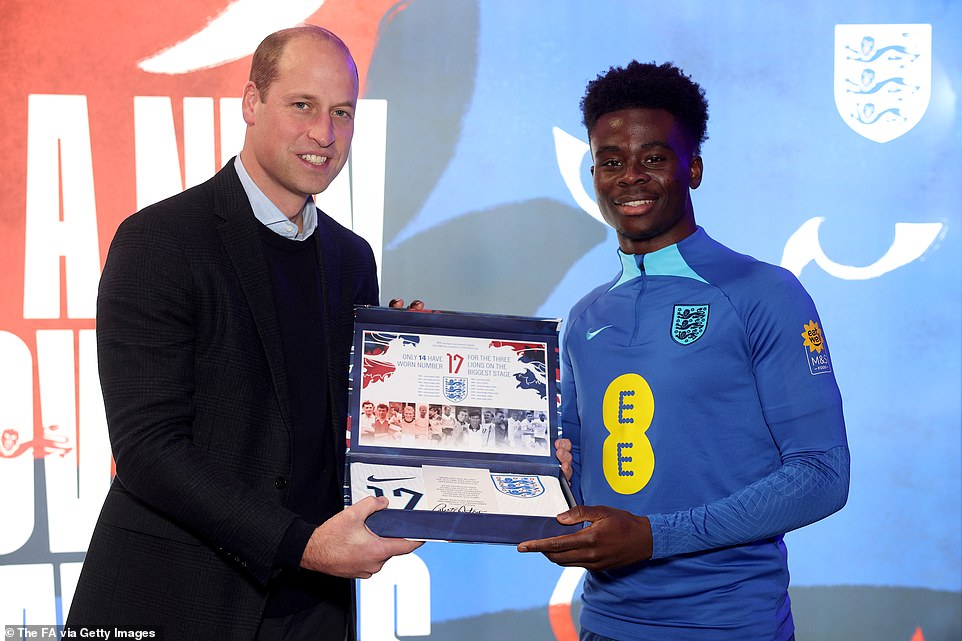 Walker has been given the No 2 jersey, worn by just 13 England players before him at the World Cup.

Fellow right-back Kieran Trippier has been in sparkling form for Newcastle this season, and looks likely to start at wing-back when the tournament gets underway.

Trippier wore the No 12 shirt in Russia in 2018, and scored in the semi-final defeat against Croatia.

He will wear the same number again in Qatar, and posted a photo of himself alongside Prince William on Instagram on Tuesday morning with the caption: ‘Great to see the Prince Of Wales yesterday. I hope we all manage to do you proud over the next 6 weeks.’

John Stones scored twice at the 2018 World Cup, and could play alongside Walker and Trippier in a back five.

He will take the No 5 shirt in Qatar, and has labelled it a ‘huge honour’ to be going to another major tournament. 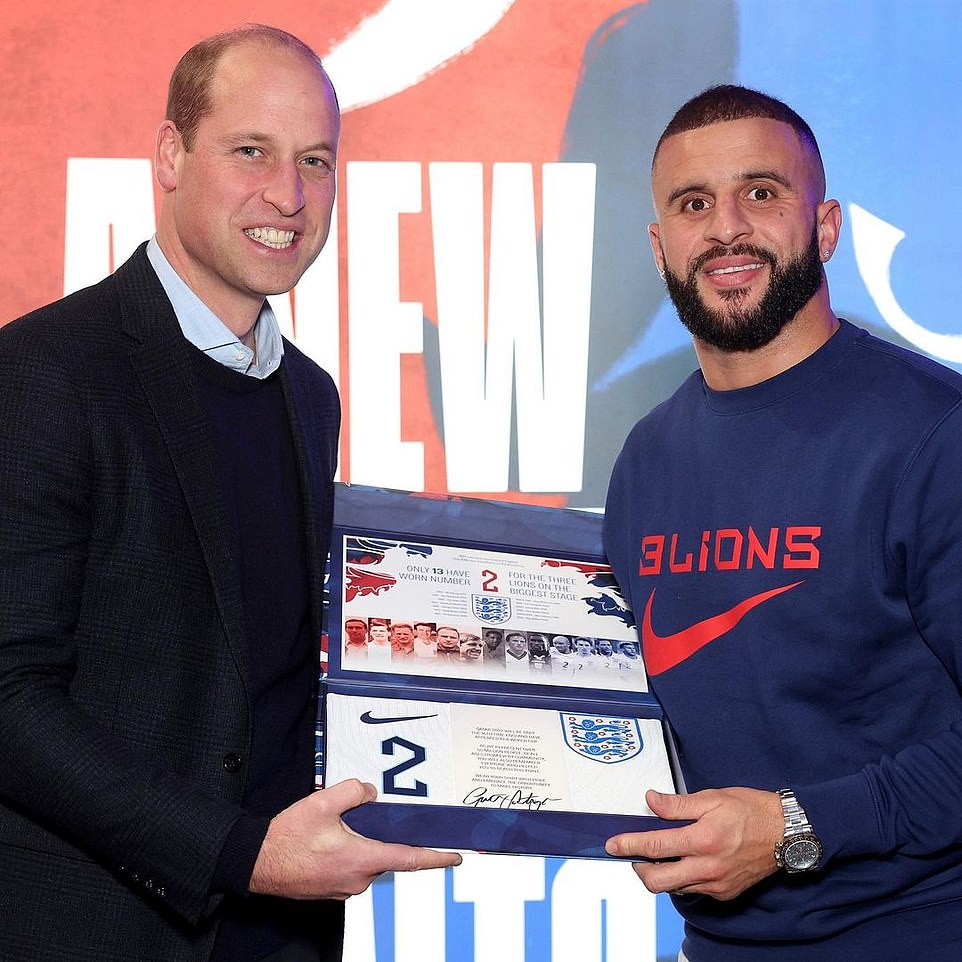 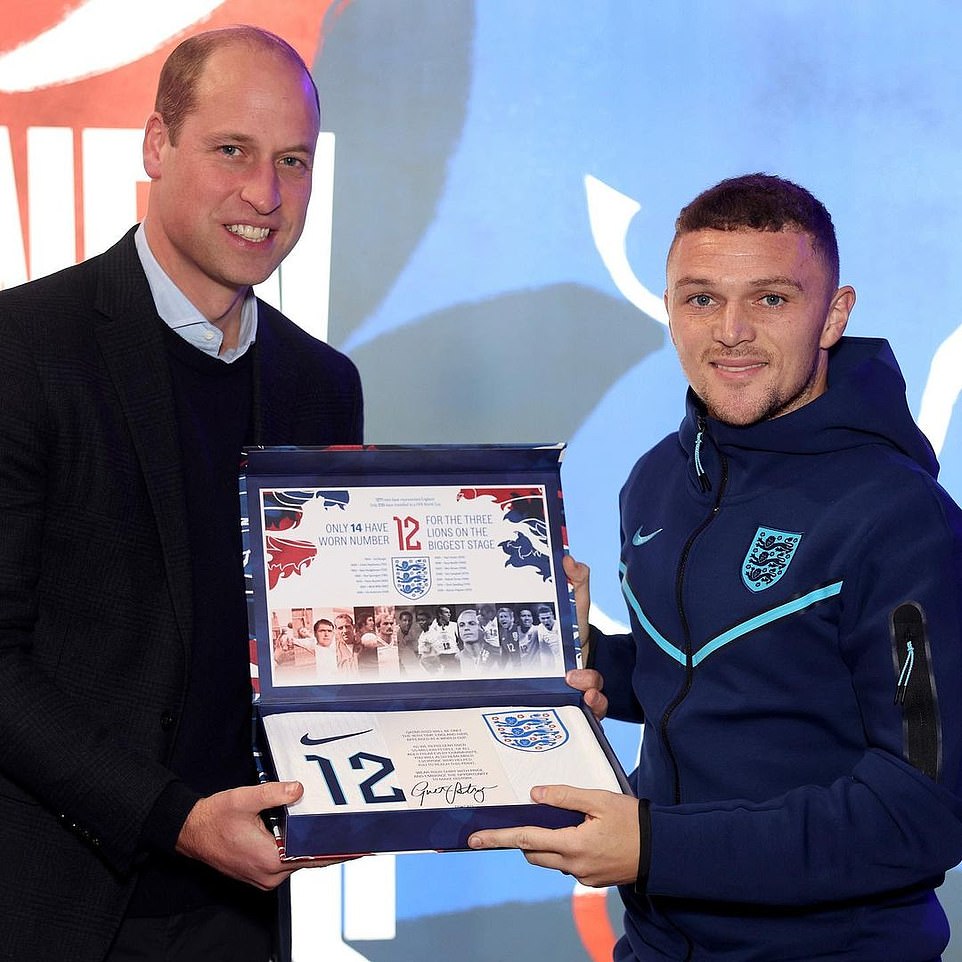 Kieran Trippier will wear the No 12 again, after starring in that shirt for England at the 2018 World Cup in Russia 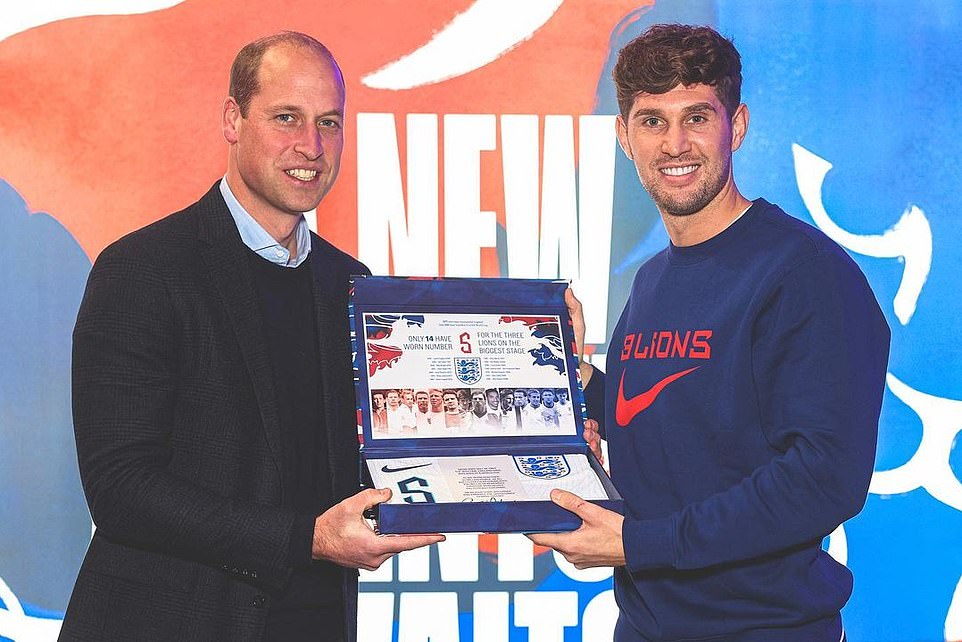 ‘A huge honour to receive my number 5 shirt for the World Cup from Prince William,’ he wrote on Instagram.

England flew out to Qatar on Tuesday morning, departing on a Gay Pride plane to highlight concerns over gay rights in the country, where same-sex relationships remain a criminal offence and whose World Cup Ambassador last week said homosexuality is ‘damage in the mind’.

‘For most professional players, its the biggest tournament you can play in. I’ve been lucky enough to do one and it was one of the greatest experiences of my life. And I can’t wait to get out this weather and get some sun!’ 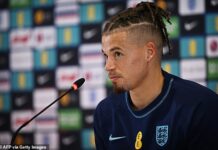 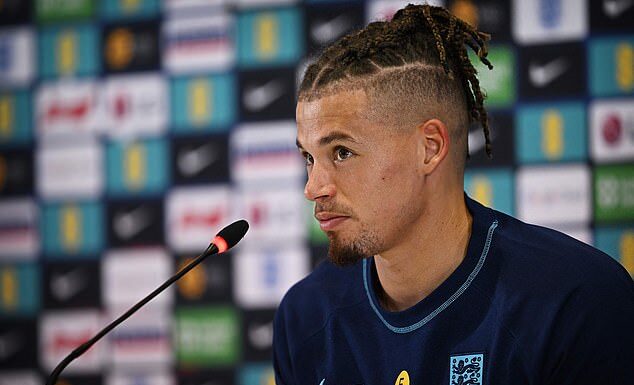