AT the Adidas concession here in Doha’s sprawling fan zone, a giant picture of Jude Bellingham stares out alongside another of Lionel Messi.

Before the tournament kicked off some were wondering if the marketing bods hadn’t got a little ahead of themselves.

Aged 19, Jude has only played 117 league games — 41 of which were for Birmingham City in the Championship.

Messi is considered to be the greatest footballer of all time.

But on Monday afternoon, at Qatar’s Khalifa International Stadium, Jude confirmed he had earned his spot next to the Argentinian.

After a deft headed goal and a thrilling box-to-box performance in his first game in the World Cup finals, England fans awarded him a rousing rendition of Beatles song Hey Jude. 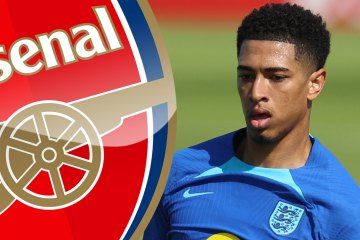 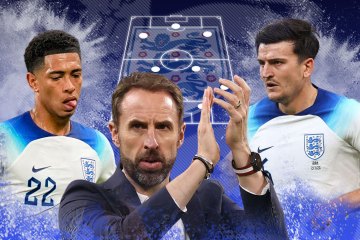 No English teenager has lit up the world stage quite so effervescently since Michael Owen burst on to the scene in 1998 with a wonder goal against Argentina.

“I’m just Jude,” he told a podcast for his German side Borussia Dortmund.

“I don’t see myself as some sort of special person because I play professional football. I’m no better than anyone else just because I can kick a ball around.”

It is a humility ingrained in him from childhood by his mum Denise and dad Mark.

He has also said of both Mark, 46, and Denise, 54: “Before being great parents they’re great people. Both are working-class and filled me with the things you need to get along.

“You can take those lessons in your personal life and social life, but also into football: Not giving up, working hard and if you want something, putting in the graft to go and get it.”

His dad, a police sergeant before retiring last week, was a journeyman non-league striker.

On blustery, mud-splattered afternoons, Jude, accompanied by his mum and little brother Jobe, watched his father at football outposts from Southend to Sutton Coldfield.

One photo tweeted by Jude showed him being cradled by his crop-headed dad as he trudged off the pitch before a game for Southend’s Catholic United in Essex.

The landmark — achieved in approximately 850 games — had begun with a strike for East Thurrock United in 1994.

He had spells with some 15 different clubs, including Bromsgrove Rovers and Stourbridge, but described himself as “not very good!”

The England midfielder said of his dad: “I used to watch him play all the time, it’s where I started to get that love for football.

“That non-league style of toughness and being gritty when you need is reflected in my game, and I do think that comes from watching my dad play — even though he never tackled!”

When Jude signed for Dortmund aged 17, he and Denise moved to the north German city and shared a flat.

Last May he said: “My mum keeps me in check on a daily basis, does pretty much everything for me. She keeps me level-headed and grounded, which is the most important thing.”

Born in June 2003, Jude Victor William Bellingham’s footballing career began on a scrap of grass outside the family’s home in Hagley, near Stourbridge, West Mids.

He recalled: “Even if they weren’t involved in the session they would be running and kicking a ball and you could just see they had a passion for football.

“You could see they were naturally gifted athletes. They could run and they had good technical skills.”

Fady Jadayel, coach at Hagley Cricket Club, said: “At 11, Jude stood out as unbelievably talented. He had a raw sporting ability. It’s difficult to express it without sounding weird but he moved with a poise and a grace. His co-ordination was unreal.”

Cricket would ultimately lose the boys to football.

Jude signed for Birmingham City’s pre-academy aged seven. Former academy manager and mentor Mike Dodds remembered: “At under-sevens he was just like any other boy, really.

“He was very good, obviously, but he wasn’t this mercurial, generational talent that people label him now.

“He wasn’t the best at his age group, he wasn’t completely in love with the game. We liked him but if someone had said he would be in the England squad at 17 we’d have thought that person was crazy.”

In 2015 Dodds had a conversation with a 12-year-old Jude which would help shape his young charge’s career.

He explained: “I sat down with him and said, ‘I think you have the ability to play all areas of midfield’, so sitting midfield was a No4, No8 was a box to box and No10 was a scorer and creator.

“We added all those numbers up and it came to 22. So we decided that was his number.”

On August 6, 2019, Jude jogged out to face Portsmouth in the Carabao Cup with number 22 on the back of his Blues shirt.

Aged 16 years and 38 days, he was Birmingham City’s youngest ever first-team player.

He would play another 43 games for City that season, earning £145 a week, but the Championship was no place for his glittering talents.

Soon Manchester United were sniffing round.

But Premiership Big Six teams are tough places for youngsters to break through.

Dad Mark was keener on Germany’s Borussia Dortmund, who offered a £25million deal and have a track record of blooding young talent, including England’s Jadon Sancho.

Some believed Birmingham be- haved a little theat- rically when they retired the No22 shirt worn by a teenager on just 44 occasions, but they have been proved prophetically correct.

In October 2020 he became the youngest Englishman to start a Champions League match, facing Italy’s Lazio aged 17 years and 113 days.

Wearing his beloved No22 shirt, Jude made his England debut as a substitute against the Republic of Ireland at Wembley.

After his first start for England, against Austria in June 2021, Southgate said: “You can’t help but marvel at the performance of a boy that age. It’s a bit disrespectful maybe at 17 to call him a boy, and he certainly plays like a man.”

He said: “They’re so consistent and the bond they have is so strong it’s made him very humble and incredibly focused. He’s so driven to be the very best and such a strong family bond is almost the perfect storm.”

Brother Jobe, 17, is following his trajectory, making his debut for Birmingham last year.

Last week Mark handed in his West Midlands Police warrant card, tweeting: “As of midnight I became a civilian after 24+ years service. Cops ain’t perfect but they’re trying their best under difficult circumstances. If we can show kindness to each other, we have a chance.”

In his prime, Mark earned around £200 a week from football.

Jude earns around £50,000 a week with Dortmund, but could more than triple that with a move to an English or Spanish giant.

His opportunities off the field also appear limitless.

So far he has used his new-found fame to fundraise for a school in Kenya.

But despite being showered with adulation and riches, Jude is quick to remember those windswept days watching his dad on the muddy playing fields of England.

He may be billed opposite Messi but it’s the hotshot non-league striker Mark Bellingham who he calls his “first footballing hero”.