When Bernard Brooks and Jermaine Smith teamed up to open Henry’s Soul Cafe in 1997 they had a good idea and a lot of passion.  Twenty-three years later, that passion has led to their restaurant serving, not only as a D.M.V. culinary staple- cemented by Smith’s father’s 1968 business, which began the legend of Henry’s Sweet Potato Pie- but also an integral part of uplifting the lives of many local residents, through their big hearts and work giving back.

“When you’re giving back like this and you’re doing it from the heart, you really don’t know what you’ve done over time, because you just do it,” Brooks told the AFRO.

The “just do it,” approach has definitely been a leap-of-faith business model that has sustained the business partners since they ventured into the world of Henry’s and opened their Oxon Hill location.  The two had been working on other projects, managing businesses and Smith was still a student at Howard University, when they started the restaurant, and with $25,000 and dedication the two became overnight restaurateurs.

“Growing up in the restaurant business- my dad is Henry- for me everything was kind of like knowing it from the back of my hand.  So that’s what we ventured into and it was probably, without a shadow of doubt, the best decision, business wise, both of us have ever made,” Smith said.

Both Smith and Brooks emphasized that the entire time they worked to build Henry’s legacy, they also served their community- it was part of their nature.

“We actually, before the pandemic, had given a lot back to the community, a lot of sponsorships and programs that we helped put in place,” Brooks told the AFRO, before explaining how they got to feeding about 150 free meals a day.  “Whether it was sending high school students to Annapolis for mock trials, so they can show them how the government works, sponsoring that.  Feeding football teams- every day, every practice, every game for years, because they were in certain areas or certain situations where they just couldn’t afford to get the proper meals to have the energy to be able to play at their best.  It’s just so many things we’ve done in the past, but since the pandemic, we saw the need that was out there, we started feeding people everyday- hospitals- doctors and nurses.  We’ve done several of those, where we did the whole hospital.”

“Hospitals… just the people walking the streets, where we see a direct need.  We get in our cars, trucks… and we’ll go and just load it up, pull up, we see people on the side of the street and we just pass out meals, give them meals- from our hand to their hands.  It’s something that our heart has led us to do from day one. This isn’t new for us,” Smith said.  “ We don’t do it because we see cameras, or T.V. or radio, or thinking that we’re going to get something back. It’s just in us, inevitably to do it.”

The restaurant’s success and the entrepreneurs’ passion for giving back even caught the attention of John Wall, formerly of the Washington Wizards, who was so inspired by their work that he teamed up with Brooks and Smith to do a food giveaway for Thanksgiving- feeding more than one thousand people.  Further, while the two are not seeking any formal accolades, organizations are taking note their major contributions to the D.M.V. and honoring them with awards for their service.

‘I looked at [Jermaine] and said, ‘Oh so people have been paying attention to what we’re doing?’  Because we were doing it whether they were paying attention or not,” Brooks said about one instance when the two were honored.

Part of the entrepreneurs’ success is their commitment to making every client feel as if they are special- like family.

“When you come into Henry’s, it’s like you’re coming into our home- to our dining room table.  When someone comes to your home you want them to feel great and eat and be nourished, so we’ve been giving away food for such a long time, and a part of so many different lives for a lot of people,” Smith said, before wondering how this philanthropic nature is balanced with making money.  “Actually, I witnessed my dad do the same thing for years.  I’m college educated, my dad was not, but I look back and say to myself, ‘How did he ever turn a profit?’  To be honest, [Bernard] and I look at each other and say, ‘How were we turning a profit?  How were we paying the bills here?  And we really don’t have an answer for it,” Smith said.

In addition to the hard work that keeps Henry’s doors open and the entrepreneurs giving back, Brooks and Smith have additional projects that allow them to continue to make a difference in the lives of others.  Brooks’ son is a syndicated DJ and radio host in 30 markets and said that there are big things budding from his offspring’s rising career, while Smith has produced several films including BET’s Holiday Heartbreak, which was released in December 2020.

“It’s the quickest movie we’ve ever turned around.  It’s the first movie, I probably cast 80 percent of the film… and it was actually a comedy, so I brought in a lot of comics. We filmed it in June and July, we turned it around and edited and we knew it was going to go live in December,” he Smith told the AFRO.  “It’s a great film.  It stars Michael Colyar, Lisa Raye, Kountry Wayne, B. Simone, and local artists… an absolutely great cast… great actors and actresses,” he added.

Always creating, Smith also teased he has a new film dropping during the holiday season of 2021.  “We just filmed another movie last week starring Bill Bellamy, and that won’t be out until next year, because it’s another Christmas film… That team of mine is doing some amazing things,” he said.

Even with their busy schedules and success, Brooks and Smith emphasized that they constantly work to uplift their hometown.

“We’re not the guys that’s from somewhere else.  We’re born, bred and raised and in the D.M.V. and we’re one of the places that keep the money in the community,” Smith said. 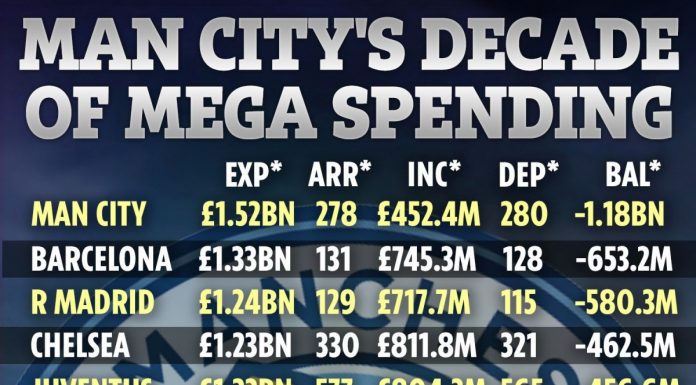 Man City have spent £1.5bn on 278 players in 10 years to top transfer money table, but Juventus brought in 577 new aces