The towering figure that stood large among the great leaders from Georgetown University has passed away.  John Thompson, Jr., the first  Black coach to win a national collegiate sports championship, died Aug. 30.  He was 78.

Thompson became Georgetown’s head coach in 1972 and built the program into a national power. He led the Hoyas to three NCAA Final Fours in a four year span.  Within 10 years “Big John,” as he was known to those who were close to him, led them from obscurity to within a Michael Jordan jump shot of winning the 1982 NCAA championship in what is remembered as one of the great games in college basketball history.

“We know how great he was at X’s and O’s on the sideline, but Big John knew the world,” said syndicated talk show host and former team manager from 1986-1988 Mark Thompson.  “He was there for all of us who were a part of the program as a father figure and prepared us to navigate the world as Black men.”

“He literally saved my life several times when I didn’t even know I was in trouble.”

Two years later, led by current Georgetown coach Patrick Ewing, Thompson, became the first Black coach to win an NCAA championship when he guided the team to the 1984 title.  The Hoyas beat the University of Houston Cougars 84-75 and Thompson made history on the floor of the since demolished Kingdome.

Thompson grew up in the Anacostia projects of Southeast D.C while playing high school basketball at Archbishop Carroll. He was a student athlete at Providence College, then drafted by the NBA’s Boston Celtics. There he played two seasons and won championships playing behind Hall of Fame center Bill Russell.  For six years, he led St. Anthony High School’s basketball team and built a program that won 122 of the 150 games he coached, which served as the apprenticeship for the Georgetown job.

In 27 years, Thompson’s Hoyas went 596–239 and made 20 appearances in the NCAA tournament including a 14-year streak from 1979–1992.  His list of NBA stars include Ewing, Alonzo Mourning, Eric “Sleepy” Floyd, Reggie Williams, Othella Harrington, Dikembe Mutombo and Allen Iverson.

Away from the court, Thompson used college basketball as a way to reform lives.  He fought to help bring urban kids into the college environment, serving as a father figure and a life coach.  The result was 74 of the 77 players who remained in the program for all four years received their bachelor’s degree, according to ESPN.

When the NCAA introduced Proposition 48 legislation in 1987, Thompson became an outspoken opponent of a college entrance requirement for student-athletes that was deemed culturally biased. The debate was centered around rules that forced recruits to score a minimum 700 out of a possible 1,600 points on the SAT, or 15 out of 36 on the ACT, while maintaining at least a 2.0 high school grade-point average in 11 mandatory courses to be eligible to compete as incoming freshmen.

According to a New York Times report in 1988, the average S.A.T. score nationally for all students was 906. The average score for Blacks was 728, proving that standardized tests, such as those used under Proposition 48, are culturally biased.

Before Georgetown’s home game against Boston College in 1989, Thompson walked off the Capital Centre court and didn’t coach in protest of the NCAA rule.

Thompson shocked the basketball world by resigning just 13 games into the 1999 season, retired to deal with a divorce and became one of D.C.’s most popular sports talk show hosts and was a college basketball analyst for Westwood Radio Networks. 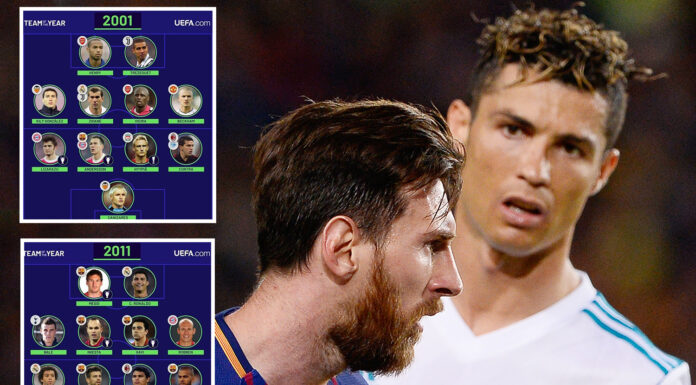 Every Champions League Team of the Year from 2001 to 2018… but which superstar XI would lift the trophy? – The Sun

Officials at centre of PSG vs Istanbul Basaksehir race row charged by Uefa after...