GAVI handed Xavi his first trophy as Barcelona boss with a devastating El Clasico performance in the Spanish Super Cup.

It hands Xavi his maiden piece of silverware as manager after lifting 25 trophies during his 17-years as a player at Camp Nou.

Despite being held in the Middle East the fixture still had the same bite as Barca defender Ronald Araujo clattered into Vini Jr early on.

Xavi’s side wasted no time in taking the game to Madrid as defender Araujo arrived at the back post to test Los Blancos keeper Thibaut Courtois with a header. 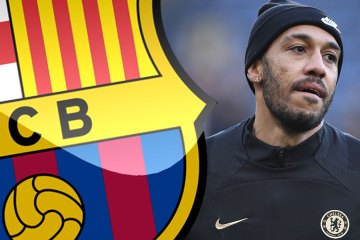 The Catalan giants could have been playing in the red and white stripes of Stoke City and you would have known it was them.

The young midfielders had Xavi’s side dancing in the Saudi desert as Courtois forced a low Robert Lewandowski strike onto the woodwork.

But the big Belgian had no hope of keeping out Gavi’s opener on 34 minutes.

The teenage prodigy latched onto the end of a quick counter move and coolly slotted home.

And after continuing dominating possession Barca’s sand-storm left Madrid in a whirlwind as the second arrived on the stroke of half-time.

This time Gavi turned provider after he teed up Lewandowski with a slick cut back to allow the Pole to slot into an empty net.

Even when Carlo Ancelotti came out after the break the Italian remained cool, calm and collected.

But his eyebrow must have been raised when Ousmane Dembele raced onto Alejandro Balde’ through-ball to force Courtois into a snap save with his feet.

Gavi showed no signs of slowing down as he continued to glide around the field with the ball super glued to his boots.

The small Spaniard then got his midfield partner involved with the goals after a through ball set Pedri on his way to add a third.

The Saudi crowd began dishing out ‘Oles!’ before Karim Benzema silenced them with a late consolation.

But it was too little too late.

And with Barca having a three-point lead the the top of La Liga ahead – Xavi may just have the Catalan giants purring again.