GARY NEVILLE reckons Harry Maguire will turn things around at Manchester United thanks to his excellent England form.

Three Lions defender Maguire, 29, has been superb at the World Cup so far.

That’s despite suffering a torrid season at United.

But, after questions were asked over his place in the England team, Maguire has shone as Gareth Southgate’s side booked their place in knockout stages, most recently in the 3-0 win over Wales.

Maguire came off in the opening game after feeling unwell, but has started all three matches so far and looks set to continue against Senegal in the last 16. 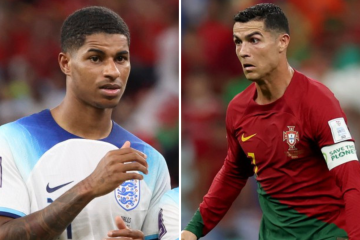 And Neville told Sky Sports: “Harry is a good player and a good centre-back who has been brilliant at the last two tournaments – he’s just had an awful time at United in the last 12 months and United is a very unforgiving place.

“I know that from being there for 20 years. If something isn’t right, that place can eat you alive, and Harry is just getting that at the moment.

“But I think he will come through it at United.”

Neville went on to compare Maguire’s situation to that of club team-mate Marcus Rashford.

Rashford has been resurgent this campaign after struggling last year, following up his good run of club form with three goals in three games at the World Cup so far.

Neville added: “Look at Marcus, he’s been through a difficult period where he probably thought ‘Is my own club turning on me, is my own city not mine anymore? Do I need to move somewhere else?’ But he’s come out of it the other side.

“There are great players that I played with at United who went through the same sort of experience, where it was tough for them for a period.

“They came through it, were better for it and they’re more resilient.

“I don’t think Rashford or Maguire when they come out of this tournament will feel phased or lacking in confidence anymore.”

Neville concluded by claiming Maguire and Rashford will now feel “bulletproof” after coming back stronger from a bad run of form.

He said: “I went through a tough period in my career, playing poorly for United and England, but I came through it and felt bulletproof… and that’s what they will feel when they go back to United.”