HARRY KANE was already a god to Tottenham fans – but last night that immortality was confirmed as he equalled Jimmy Greaves’ record of 266 goals for the club.

Just imagine how revered he will be if he actually does sign a new contract.

Kane’s future dominated the hours leading up to this London derby with news emerging that he is open to starting talks over fresh terms when the transfer window closes.

With 18 months left on his current deal, time will tell if he can truly be convinced to commit again to a club where he has been so prolific but won nothing.

He will now go into those negotiations with no player having scored more than he has in the North Londoners’ history.

Greaves’ record has stood for 53 years but was always going to go eventually with Kane around.

The England captain matched it with a vintage effort, holding off a defender with his brute strength and finding the corner with laser-like accuracy during first-half stoppage time.

It was enough to give Antonio Conte a much-needed victory that moved his side to within three points of fourth-placed Manchester United, albeit having played a game more.

Support for Kane from the travelling fans was heard with minutes of kick-off, which had been delayed by 15 minutes due to travel disruption – and then a further three due to an issue with ref Paul Tierney’s technical equipment.

The chants of ordering chairman Daniel Levy to “get out of our club” were unmistakable too right from the off.

Conte had urged his side to bring back the “nasty” streak he felt they had last season ahead of this game.

Spurs have become a soft touch of late, conceding a whopping 21 goals in their last ten league games prior to last night – shipping two or more in nine of those.

In Conte’s own words, he felt Spurs “fought a lot, were suffering a lot, maybe sometimes we didn’t deserve it but in the end we won” last term, which ended with a top-four spot.

His team looked as if they had taken his advice on board with some crunching challenges early on from Dier and Pierre Emile-Hojbjerg.

Though they were nothing on the one Joao Palhinha put in on Hojbjerg minutes later which earned him a yellow card.

Fulham have been in fine form, winning five games in a row before last week’s last-gasp defeat at Newcastle.

With Spurs struggling at the moment, it was unsurprising that the hosts had the better of the first half.

Hugo Lloris has dropped a few clangers of late but he did well to keep out strikes from Bobby DeCordova-Reid, Pereira and Harrison Reed.

Son Heung-min’s season has been a disaster compared to last term, where he shared the Premier League golden boot with Liverpool’s Mo Salah.

Nothing is going his way and you had to feel for the South Korean as his attempted dribble ended with him losing the ball and catching Kenny Tete on the top of his ankle.

It was a bad tackle and Son was lucky to escape with only a yellow card.

Spurs finally started to show some attacking intent, with Kane firing a shot in anger and Emerson Royal testing Bernd Leno at his near post.

Then, in first-half stoppage time, they nicked the lead thanks to their inimitable No10.

Son ended up with the assist as he laid it off to his old mucker on the edge of the area.

Kane held off Tim Ream and fired into the far corner, displaying the power, precision and ruthlessness that have made him into one of the world’s greatest strikers.

It drew him level with the legendary Greaves’ haul – a record which has stood since 1970.

Kane almost broke it just before the hour when nodding on Ben Davies’ header back but was denied by Leno’s super stop.

Fulham pushed for a leveller with their own talisman Aleksandar Mitrovic heading over with 15 minutes left.

But they were ultimately undone by Kane, like so many teams before them.

Yet whenever his time at the club is over, whether it be this summer, next or in years to come, there is no doubting the man dubbed “one of our own” will be out on his own in the goal-scoring stakes. 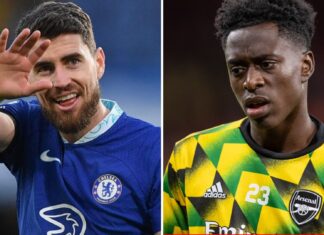 sportslatestnews - January 31, 2023
0
Hollwood star Witherspoon is Gunner Most top clubs have a good idea of their celebrity fans but it sounds like Arsenal have learnt about...