The former world number one, now ranked 119, has been battling hip and groin injuries and there are again question marks over his future in tennis.

AFP Sport looks at five major moments in 34-year-old Murray’s career at the All England Club:

2005 – Debut year, reaches third round
— Ranked 312 in the world, 18-year-old Murray knocks out George Bastl, who had defeated Pete Sampras at the tournament in 2002, and 13th-ranked Radek Stepanek to make the third round.

“I want to play in big tournaments and I have proved to myself that I can,” said the wiry Murray who required treatment for a cramp as his challenge faded.

2012 – Tearful final loss to Federer
— Murray, now 25, and at four in the world, was aiming to become the first British man since Fred Perry in 1936 to win a Grand Slam title.

But Federer triumphed 4-6, 7-5, 6-3, 6-4 to claim his seventh Wimbledon and condemn Murray to a fourth successive loss in Slam finals.

“There are mixed emotions. Most of them are negative. The reaction from the crowd was great,” said a tearful Murray, the first British man in a final at the All England Club since Bunny Austin in 1938.

“I felt like I was playing for the nation and I couldn’t quite do it.”

2012 – Olympic gold on Centre Court
— Just four weeks later, Murray and Federer were back in Centre Court but this time Murray won 6-2, 6-1, 6-4 to become the first British man to win an Olympic singles gold since Josiah Ritchie in 1908.

“It’s the biggest win of my life,” said Murray, who went on to defend his Olympic title in Rio four years later.

“This is the best way to come back from the Wimbledon final.”

2013 – First Wimbledon title
— Murray, who had captured his maiden Slam title at the US Open in 2012, became Britain’s first Wimbledon men’s champion since Fred Perry in 1936.

Before climbing into the player’s box to celebrate with his family, Murray had turned towards the press box.

“I was staring in the direction of quite a few of the guys in the press. I’ve had a difficult relationship at times over the years. The last few years have been much better,” he explained.

“I know for you guys it’s important that I win this tournament. I tried my best. I worked as hard as I could to do it.”

The 29-year-old was the first Briton to secure multiple All England Club titles since Perry in the 1930s.

“I’m just really happy I managed to do it again after a lot of tough losses in the latter stages of the slams over the last couple of years,” Murray said.

“To do it twice here, an event where there is a lot of pressure on me to perform well, I’m very proud.” 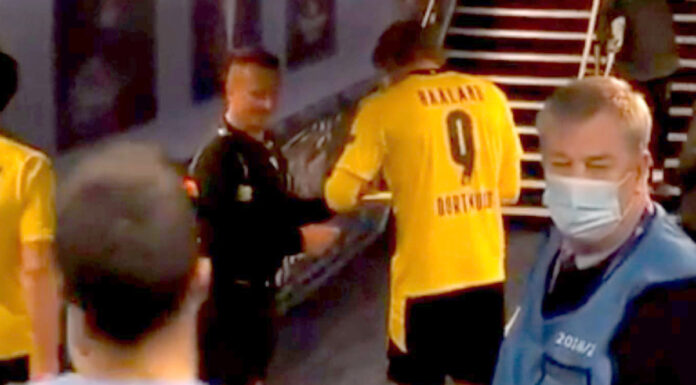 Chelsea stars troll Kai Havertz over his new tattoo as he unveils it after...

Harry Kane and Dele Alli could feature for Spurs against Newcastle after returning to...