While some teams had planned to wear “One Love” armbands seen as a rebuke to host nation Qatar’s human rights record, the Canadian men had not detailed their plans.

But FIFA’s threat of on-field punishment – via showing a yellow card – for players pushed some World Cup teams to back down Monday and abandon a plan for their captains to wear the armbands in question. That would mean the captain would start the game with a yellow, just one caution away from ejection from that game and the next.

European teams may have expected merely to be fined.

FIFA rules says: “For FIFA final competitions, the captain of each team must wear the captain’s armband provided by FIFA.”

No one wore the “One Love” armband Monday. England’s Harry Kane wore the approved black “No Discrimination” armband in the match with Iran. The England team also took the knee prior to kickoff as an anti-racism gesture

It is “what we stand for as a team and have done for a long period of time,” England manager Gareth Southgate said before the match.


Asked Monday whether Canada planned to follow England’s example by making a gesture, defender Steven Vitoria replied: “I think this group is always ready to help what we believe is correct.

“I don’t really want to go into that detail but I think our image as Canada as a country, we’re always here to protect the good. It’s a sport but life isn’t always a sport.”

A Canada Soccer official said later that Hutchinson would wear the “No Discrimination” armband, in a decision that was made by the entire team.

The armband issue is the latest dispute that threatened to overshadow play on the field. Since being awarded the World Cup hosting rights in 2010, conservative Muslim Qatar has faced a raft of criticism, including its treatment of low-paid migrant workers and woman and its suppression of free speech. It came under particular fire for its criminalization of homosexuality.

Previously FIFA had planned to introduce the “No Discrimination” campaign starting with the quarterfinals.

FIFA had previously proposed captains wear armbands with socially aware, though generic, slogans. With the “No Discrimination” armband to appear at the quarterfinal stage.

On Monday, it offered a compromise, saying captains of all 32 teams “will have the opportunity” to wear an armband with the slogan “No Discrimination” in the group games.

“FIFA is an inclusive organization that wants to put football to the benefit of society by supporting good and legitimate causes, but it has to be done within the framework of the competition regulations which are known to everyone,” FIFA said in a statement.

The statement said FIFA president Gianni Infantino “has reiterated his support of the LGBTQI+ community during the FIFA World Cup Qatar 2022.”

“I have been speaking about this subject with the country’s highest leadership,” Infantino said in the statement. “They have confirmed, and I can confirm that everyone is welcome. If anyone says the opposite, well it’s not the opinion of the country and it’s certainly not the opinion of FIFA.”

America’s top diplomat on Tuesday criticized FIFA’s decision. Speaking alongside his Qatari counterpart at a news conference, U.S. Secretary of State Antony Blinken said it was “always concerning … when we see any restrictions on freedom of expression.”

“It’s especially so when the expression is for diversity and for inclusion,” Blinken said at Doha’s Diplomatic Club. “And in my judgment, at least no one on a football pitch should be forced to choose between supporting these values and playing for their team.”

FIFA did not immediately respond to a request for comment over Blinken’s remark.

— with files from The Associated Press 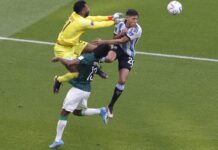 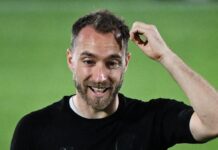 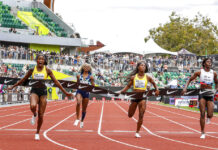 Saudi Arabia star stretchered off after being KOd by own keeper in horror injury...