Ten Hag put together clips of Chelsea, neighbours Manchester City as well as Liverpool — who United face tomorrow — showing his bottlers how to do it.

And boss Ten Hag warned his players to tell their loved ones they will “get in early and go home late” until they sort out their problems.

This season has been a painful watch for everyone at Old Trafford — and that now includes Ten Hag’s misfiring flops.

United fans had to peer through their fingers as Ten Hag’s men were battered by Brighton and Brentford.

And the Dutch boss looked shell-shocked as his shambolic side fell apart at the Brentford Community Stadium last week. 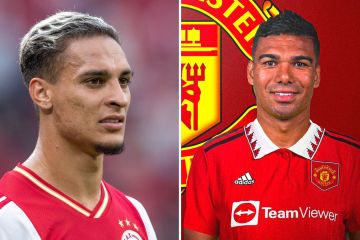 Fuming Ten Hag is stunned by the Red Devils’ dismal displays during an opening fortnight that confirmed the new manager’s honeymoon period was over before it even began.

The former Ajax chief gave his under-performing players both barrels after the 4-0 loss against Thomas Frank’s Bees that left United at the foot of the Premier League.

Ten Hag dragged them in for some punishing running drills last Sunday morning in the wake of that embarrassment.

And he has taken the drastic step of showing his squad clips of City, Liverpool and Chelsea to highlight the approach of those teams — and to expose the gap between the Prem elite and his own side’s  current sorry efforts.

It has been a case of look and learn for Ten Hag’s players, who have been put on notice that there will be no let-  up until performances dramatically improve.

The manager has also made it clear to the club’s high-profile names that nobody’s place in the team is safe.

And that includes Cristiano Ronaldo, Bruno Fernandes and skipper Harry Maguire. The move is a clear sign that the manager believes he has to go back to basics if he is to sort out the side’s desperate problems.

Ten Hag wants to impose a high-pressing style — but the stats against Brentford highlighted the challenge the manager faces.

Ten Hag and Steve McClaren are acting as good cop and bad cop.

Frank’s side outran their big-money opponents by almost 14km and pressed 21 times in the final third compared to United’s figure of just seven.

The Red Devils boss knows he must improve the fitness levels of his squad but has also been alarmed by the  attitude and lack of fight shown by his new players.

And he warned the first team squad to tell their loved ones they will “get in early and go home late” until they properly understand how he wants them to play and demonstrate it on the pitch.

There is a fear things will get a lot worse before they get better.

Especially with Liverpool being next up at Old Trafford tomorrow.

Fans — who are planning more protests against club owners the Glazer family — fear the team will suffer a third defeat in a row on Monday unless there is a dramatic improvement.

A source said: “Ten Hag and Steve McClaren are acting as good cop and bad cop.

“Ten Hag is hammering the players and McClaren is putting an arm around them as best he can. The manager has told the players, ‘I’m  drilling you and drilling you. What do you not get?’

“He’s accused them of having no chemistry and has shown them videos of Liverpool and City and how they deal with issues on the pitch.

“He also showed the squad how Chelsea attacked Spurs last weekend in the hope it helps them understand how he wants them to play.

“He knew confidence was low but he’s realised just how big the job is and appears to have the weight of the world on his shoulders.

“Ten Hag has told the players that he’ll take the blame for them not being fit enough, but he’s criticised them for not having enough hunger.”

SunSport understands Ten Hag has also warned the first team that no one is “undroppable” and many of the squad believe that message has been aimed at Fernandes, Maguire and Ronaldo in particular.

The source added: “After the Brentford game, Ten Hag tore strips off Bruno in particular.

“Everyone thinks he’s letting Bruno, Maguire and Ronaldo know they are not guaranteed a starting spot, no matter what their status in the team is.”