PEP GUARDIOLA was forced to step in to stop a confrontation between Jack Grealish and his Atletico Madrid antagonists.

The England star, 26, came on for the final 30 minutes at The Etihad but had an eventful match.

Seconds after coming on he was bundled over by Rodrigo De Paul and that was just a sign of things to come.

He was fouled throughout and at one point, while lying on the ground, Angel Correa smashed the ball at the winger, hitting Grealish’s face.

Tensions eventually boiled over with Grealish confronting the opposition leading Guardiola to shove his own player to keep him out of trouble.

Even as the referee blew for full-time Atletico players were still trying to get under Grealish’s skin, with Šime Vrsaljko and Stefan Savic aggressively shouting in his face and pointing fingers. 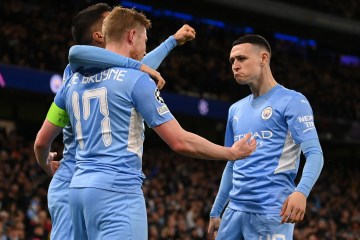 But Guardiola instead focused proudly on Grealish’s response, saying after the match: “The referee is there, it’s not my job.

“The ref is there, Jack reacted really well and focused on what he had to do in the game.”

Meanwhile Phil Foden, who came on at the same time as Grealish, enjoyed a much better experience.

The youngster wowed spectators with his skill and range of passing, as well as his brilliant assist for Kevin De Bruyne’s winner.

City dominated throughout but it took the tricky Englishman to make the difference as Guardiola’s side edged the game 1-0.

Foden will surely start in the second leg at the Wanda Metropolitano and could be joined by Grealish in the starting line-up, who could frustrate the Atletico team once more.