CRISTIANO RONALDO is considered by many to be one of football’s greatest of all time, and his record in the Champions League certainly proves this.

The Manchester United forward seems to relish the opportunity to play in the competition as proven by the set of EIGHT records he holds to his name in the tournament.

Twitter user @CR7prime_ outlined these records, the first being the most crucial one for the striker’s job description; goals scored.

Ronaldo holds the record for most goals in the Champions League with 140, and unbelievably he didn’t score once until his fourth season in the competition with Man United.

The next record he holds is the most assists record. In both this metric and goals scored he leads the next best player who is Lionel Messi.

There are conflicting values for the total amount he has, with some sources saying the Portuguese star has 48 assists, while others claim he has 42. 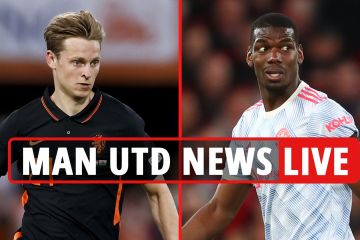 Sticking on the theme of goals, Ronaldo also holds the record for the most hat-tricks and braces in the competition.

He is joint with Messi with eight hat-tricks scored, seven of which came with Real Madrid – and a value which is three more than the next best player Robert Lewandowski who has five hat-tricks.

In terms of braces, Ronaldo eclipses Messi by just four, earning his 38th brace in the Champions League for Man United against Atalanta in the group stage.

The 37-year-old also holds the record for the most goals by a player in a single season, thanks to his 17 goals in the 2013/14 season.

In fact, Ronaldo also takes up the second and third spots here with 16 goals in two more seasons – the 15/16 and 17/18 seasons, both years Madrid won the Champions League.

His longevity is also something to be marvelled at. He also lays claim to the joint record of the most opponents scored against with 38 – shared with – who else – Messi.

But ultimately, what use are goals and assists if a player cannot win games and titles with them? Well Ronaldo has done just that as well.

He holds the record for the most wins in the Champions League with 113 and is joined only by former teammate Iker Casillas as the only other player to reach 100 wins, though this may come with the territory of having the most games played as well.

Ronaldo is also not one to shy away from the big occasion. He has the most final wins in the competition’s history with five.

This record is shared by a number of his Madrid teammates – including Dani Carvajal, Karim Benzema, and Luka Modric after their triumph over Liverpool in this season’s competition.

However, the record for the most titles goes to former Madrid star Paco Gento, who has six.

Indeed, as many as 17 other players lay claim to five Champions League titles along with Ronaldo.

Ronaldo actually holds even more records to his name, and thus his title as the best player to ever grace the Champions League certainly cannot be refuted. At least for the time being.

After a poor season for Man United, Ronaldo is facing the prospect of not playing in the Champions League and instead dipping into the Europa League – a tournament he has never played in before.