RAHEEM STERLING is closing in on a switch to Chelsea with Thomas Tuchel’s side holding fresh talks with Manchester City.

No fee has yet been agreed for the England ace – but talks are believed to have progressed well over the weekend.

SunSport exclusively revealed last month how City know they are facing a losing battle to keep the 27-year-old.

Chelsea have ramped up their pursuit of the ex-Liverpool ace with target Raphinha poised to link up with Barcelona.

The Citizens are keen to top the £45million fee they are receiving from Arsenal for Gabriel Jesus if they are to allow Sterling to move to Stamford Bridge.

Jesus‘ switch to Emirates will finally be announced on Monday, with the striker to wear the No9 shirt. 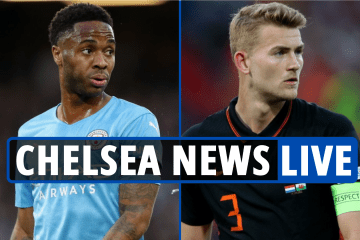 Both Jesus and Sterling had a year left on their contracts at the Etihad and were worried about game time following the arrival of Erling Haaland and Julian Alvarez.

SunSport reported in April that Gunners boss Mikel Arteta was keen on a move for the Brazilian – who he worked with when he was Pep Guardiola’s assistant.

Meanwhile Kalvin Phillips will be among four new recruits officially unveiled by Manchester City next weekend.

The England midfielder’s £45m switch to the Premier League champions is expected to be confirmed on Monday after he underwent his medical on Friday.

And at the weekend the 26-year-old will join Haaland, Alvarez and Stefan Ortega at the Etihad at a special event to meet the fans.

That visit will mark the start of the hard work for Phillips and his new team-mates.

Pep Guardiola has given his squad a few extra days off this summer – meaning pre-season training is not due to start until next Monday.

All the new boys are expected to be on the plane when they depart for a short tour of North America five days later.