CHELSEA are set to wear their infamous third ‘Crystal Palace’ kit for the Champions League final.

The game looks to have been given away by competition sponsors Gazprom on social media.

And it means should Chelsea win the showpiece event against Premier League champions Manchester City, they will lift the trophy wearing a jersey officially voted the worst in world football.

Chelsea reached their third Champions League final after seeing off Real Madrid in the semis.

Thomas Tuchel’s men will now take on Pep Guardiola’s side for the third time in just over a month, with City set to wear their classic sky-blue home kit.

And having won the previous two encounters, Chelsea are sure to be in a confident mood.

However, if Gazprom’s social media post – regarding a ticket giveaway for the final – is correct, Chelsea will be taking to the field in Portugal in red-and-blue stripes.

The alternative kit was slammed by Blues fans when it was revealed in September, with many comparing it to the home jersey of London rivals Crystal Palace.

The shirt made its debut later that month in the 3-3 draw with West Brom, prompting others to add Chelsea not only looked like Palace, but played like them too.

However, the third kit’s finest – or worst – hour was yet to come.

In December, almost 2,000 people voted it the worst football kit in the world.

The unwanted award was given by Footy Headlines, with Chelsea taking 22 per cent of the vote ahead of monstrosities from Wolves and the Baggies.

It now remains to be seen if the Blues can have the last laugh as they bid for more Champions League glory against a City side making their debut in the final.

It’s all to play for as Chelsea, Liverpool and Leicester battle for a top four position 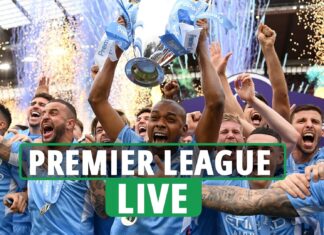