A local soccer super fan is about to embark on the trip of a lifetime.

On Tuesday, Jessie Lail finished packing his bags for his early Wednesday flight to Qatar on his way to his first World Cup.

“I’ve never had the opportunity to go (to the World Cup) and especially when your home country’s playing and we can go to a different country to enjoy their cultures and their festivities, and at the same time watch the beautiful game of soccer.”

Edmontonians head to Qatar to cheer on Canada at World Cup

The sport has been part of Lail’s life since the young age of eight. He has since introduced the sport to his family, and now he rarely misses a game, especially when it comes to Manchester United and Team Canada.

“I miss only the games where my kids are in my ear and need my attention more than the tv’s attention,” he said. “Other than that, I’m watching every (game). Soccer Saturdays are a tradition in this house.”

While the couch in his basement is his usual soccer viewing seat, soon he’ll have a front-row seat along with thousands of other fans; a Father’s Day gift from his wife.

“I think Canada has a great chance. They’re probably one of the fastest teams in the World Cup. We haven’t been there since 1986,” Lail said.

“Canada is a mosaic where we have every single nationality and culture in this country and I think bringing everybody together on a Canadian team at the world stage is going to be phenomenal for us.”

Lail will join his siblings who are already in Qatar.

‘We believe’: Canada confident ahead of FIFA World Cup opener in Qatar

While not everyone will get the chance to catch the games live in person, the city of Calgary is buzzing with excitement.

Some soccer specialty stores say Canada jersey sales are through the roof. While some bars and restaurants, such as the SS 106 Aperitivo Bar, are opening their doors to fans at 6 a.m.

“We have to,” said Domenico Spadafore, the SS 106 Aperitivo Bar owner. “We’re the world cup headquarters. We have to open for every game.”

Since the start of the tournament, Spadafore said the restaurant has been packed with fans wanting to get in on the action during most of the games. And this past weekend there wasn’t an open seat in the entire bar.

“Sunday was really exciting, I didn’t expect it for Ecuador and Qatar, but it was great,” he said.


While Canada has yet to hit the field for their first game of the tournament, reservations at the bar are filling up quick.

Spadafore believes Canada’s success could mean big things for the sport across the country as it makes its first World Cup appearance in 36 years.

“I was only one… so I didn’t even see Canada play in a World Cup, so there’s a lot of excitement. And if they get through the group, it’s gonna be awesome,” Spadafore said. “It’s going to bring more fans to the sport of soccer.”

Canada plays its first game against Belgium on Wednesday at 12 p.m. 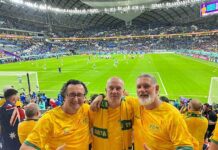 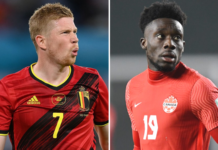 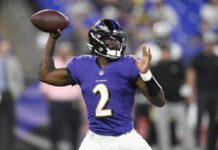 World Cup superfan lifts the lid on what it’s REALLY like to see Socceroos...