BERND LENO admits that Arsenal have hit rock bottom after suffering their eighth Premier League defeat of the season.

Only bottom of the table Sheffield United have lost more times and now the shell-shocked Gunners face Manchester City in the EFL Cup on Tuesday and Chelsea in the League on Boxing Day.

German international keeper Leno said: “A lot of things are going wrong for us, the situation is getting heavier and our confidence is not at the top level.

“It hurts very much but this team is still alive and it’s not the time to feel sorry for ourselves.”

Under-pressure manager Mikel Arteta celebrates his first year in the job today with his team facing the unthinkable prospect of a relegation battle.

He said after last night’s 2-1 defeat at Everton: “We had 13 shots but only two were on target and our ratio is really low.

“We need to be more consistent to win matches and now we are in a big fight and we have to start getting points straight away.

“We need to generate more because once again we dominated the game but lost in two key moments to an own-goal and a set-piece.

“We made it difficult for ourselves with the way we conceded the first goal and then to concede again from a corner is really frustrating.

“Everton are one on the biggest teams in the League and they deliver the ball into the right area and make it a 50-50 in that dangerous zone.

“We’ve been defending the corners really well but in the last week we have conceded two goals against Burnley and now Everton.

“And after that it becomes really difficult when you are facing a team who are defending really low and time-wasting.

“All the boys are upset but they are still together and they are all fighting.”

But Everton striker Dominic Calvert-Lewin insisted that his team had been targeting Arsenal’s defence on set-pieces and knew they could take advantage of their opponents’ aerial frailties.

He said: “We looked at where their weaknesses are at the near post from corners and tried to make it one of our strengths. And thankfully we got a goal from it.

“We knew they would be exposed in that area from set-pieces and Yerry Mina is a massive threat in the air, so if the delivery is on the money and he heads it, chances are he’s going to score.”

The Merseysiders are up to second place in the table following this victory and manager Carlo Ancelotti said: “It was a top, top performance today.

“We have fantastic players on set-pieces and score a lot of goals from them. We work on this because we are very dangerous.

“Honestly Arsenal played better than us in the second-half and we had to defend and to suffer but the result at half-time was fair.

“We have done really well in our last few games and we have shown more consistency and our position is really good.

“But this is not the end of the season and we have to keep fighting.” 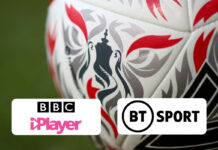 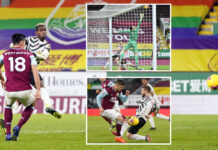 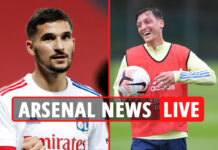