The centre-back has been a revelation since linking up with Mikel Arteta‘s squad ahead of this season.

Despite signing in the summer of 2019, the 21-year-old only made his Gunners debut at Crystal Palace on the opening day.

But Saliba‘s contract expires at the end of the current campaign.

However, according to David Ornstein, Arsenal have taken up the option to extend his deal by an extra 12 months. 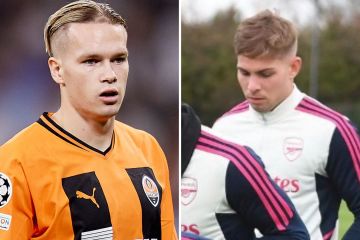 And The Athletic journalist has also claimed that Arsenal and Saliba remain locked in talks over a fresh long-term contract.

Arteta said: “New deal close? I hope so. That’s more for Edu and the board to discuss with William.

“But what I know is the player is really happy, the player wants to be here – and that’s the main thing.”

Saliba’s form for Arsenal – who face Brighton this weekend – has led to success on the international stage with the defender winning eight caps for France since his debut in March.

He was named in their World Cup squad but made just one appearance off the bench against Tunisia.

And his return to Prem action didn’t come without its troubles as he conceded a penalty against West Ham on Boxing Day.

Fortunately for Saliba, he was bailed out by Bukayo Saka, Gabriel Martinelli and Eddie Nketiah who maintained Arsenal’s lead at the top.