Until the Baltimore Ravens are eliminated from the NFL Playoffs or win another Super Bowl, Lamar Jackson is the hottest player on earth.  Jackson’s stage this weekend is one that tends to introduce transcendent moments that either launch or derail careers in front of one of the league’s biggest audiences.

The NFL knows who America wants to see on this week’s edition of Saturday Night Live (NFL Style) and it’s not Eddie Murphy. That’s why Baltimore gets the only prime time playoff game this weekend which has the city feeling delirious.  Normally the NFL Divisional Round is the biggest TV audience of the weekend and over the last 20 years it has been the spot where hearts are broken and legends are born.

It was the weekend where we learned of the little known “tuck rule” that launched the dynasty that is the New England Patriots on a snowy night vs. the Oakland Raiders in 2002. Tom Brady appeared to have fumbled when he was sacked by Charles Woodson. However, the officials ruled the young Patriots quarterback, who had taken over for a veteran that had taken them to a Super Bowl previously, was trying to tuck the football away when it came loose so they kept possession and went on to win Super Bowl 36.

The drama of that moment with its lengthy delay and the replays added to the primetime novelty of a snowy NFL Saturday night sudden death postseason game.  After it went to overtime thanks to an Adam Vinateri 45-yard field goal in a blizzard for all the world to see his 23-yarder to win became an afterthought. Nonetheless, it stands the test of time as one of the greatest games in sports history.

Baltimore already has two tremendous moments on their previous Super Bowl runs in the divisional round and one is especially remembered for being one of the most iconic plays in NFL history.  During the Ravens first NFL title run, Ray Lewis finished the Tennessee Titans when he ripped a pass away from Eddie George and returned it for a touchdown sending them to the AFC title game where they beat the Oakland Raiders in 2001.

In 2012, when all hope seemed lost, Joe Flacco connected with Jacoby Jones for a 70-yard touchdown with :31 seconds remaining which sent the game into overtime against the Denver Broncos.  Justin Tucker ultimately won it with a walk off 47-yard field in the second extra period and the rest is history.

The two previous Super Bowls were more of a local thing because the Ravens were built on hard nosed defense. Their games were pure, physical and ugly. Baltimore loved its football team but America was only intrigued, and needed several weeks of the playoffs to grasp the momentum of those who were centered around Ray Lewis’ redemption, then ultimately his retirement.

With Jackson at the helm, the Ravens are must-see TV, which is why they get the NBC Saturday primetime divisional playoff game. He is the NFL’s next box office sensation and if Baltimore wins the Super Bowl he becomes a mogul of Madison Avenue. Jackson is on the verge of being what LeBron James is to the NBA with three more victories this year.

Jackson remains motivated after the loss in his postseason debut last year. This is his moment to shine under the championship light he seems poised to handle after the disappointment of that loss to the Chargers. The Ravens may lose but Jackson won’t be overwhelmed since he’s faced postseason pressure already. Now it’s nothing more than an extension of his regular season, which was historically brilliant.

If the brilliance continues perhaps the Ravens assume the mantle of the NFL’s next great dynasty, with the Patriots’ sense of invincibility no more. 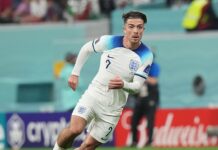 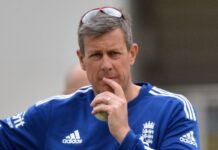 I’d have a cigar on if I were defending against Harry Kane in this...