The Blues trailed 3-0 at the break in the FA Cup third-round tie thanks to goals from Riyad Mahrez, Julian Alvarez and Phil Foden.

That led BBC pundit Shearer to launch a scathing assessment of Graham Potter’s side, questioning their lack of energy and commitment.

He said: “From a Chelsea point of view, that is not acceptable that performance.

“I said they needed some energy, character, all of those things.

“I don’t care how many injuries you’ve got in your team, you can still go out and put a shift in. They haven’t and it’s embarrassing from their point of view. 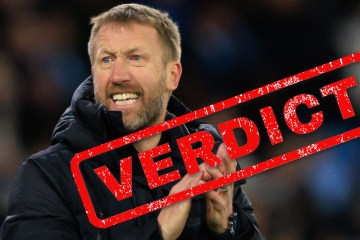 “Going forward it’s been so bad. They’ve been nothing short of pathetic in forward positions. Where’s the movement? They’ve had nothing up front at all. Everything has been sideways or even backwards.

“They’ve got to give the fans something now, show they care about this football club, because that 45 minutes was not acceptable.”

The fans got little response after half-time as the game ended 4-0 to City.

Some supporters even left before the half-time whistle as they could not bear to watch Chelsea‘s insipid display.

There was no positive note for Chelsea at all with Mateo Kovacic, Kalidou Koulibaly and Jorginho all performing badly.

Potter now has his work cut out to turn things around as the Blues have just one win in nine games.