Sir Geoff Hurst bounds into a hotel bar near his Cheltenham home and the bartender scuttles over.

‘For the first time in my life,’ he grins, ‘I will be having an alcoholic drink during an interview. Ginger ale mixed with Jack Daniel’s whiskey, please. It’s my wife’s favourite.

‘I’m happy. England have made me happy. We are celebrating. Gareth Southgate is getting it right. It’s the mood of the country. So cheers!’ 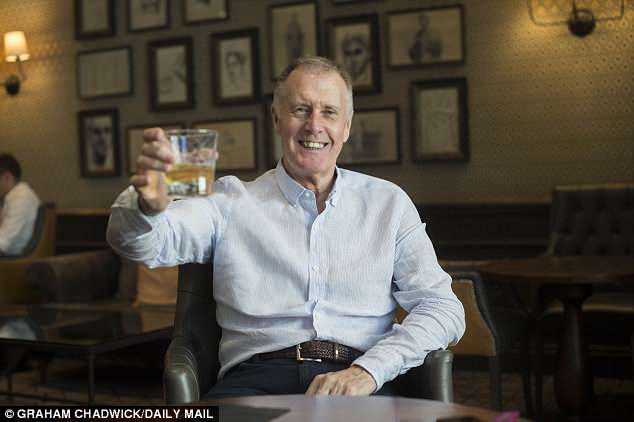 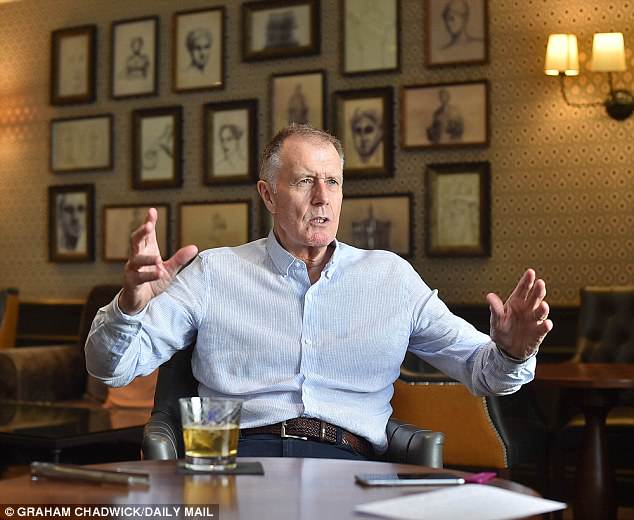 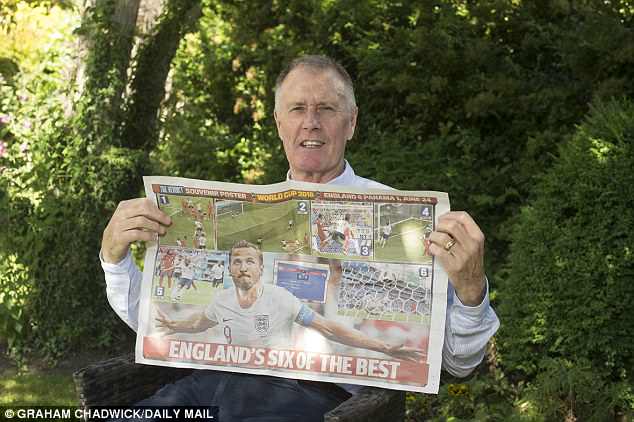 Glasses are clinking and he is swiftly into his stride. ‘I agree we had forgotten how it feels to enjoy England. Euro 2016 and 2014 in Brazil were bitterly disappointing. Iceland — I have never seen anything like it. England were inept and lacking character. My wife Judith said, “I have been watching football with you for 50 years and I have never seen you so animated”.

‘I was shouting at the television. It is frustrating for the country. At this level it becomes a national event. It is not just football fans who care, everyone watches the match. More than 32million watched our final in 1966!’

In a World Cup year, Hurst’s views always take on deeper significance, but Harry Kane’s exploits mean one of his records is now shared more widely. 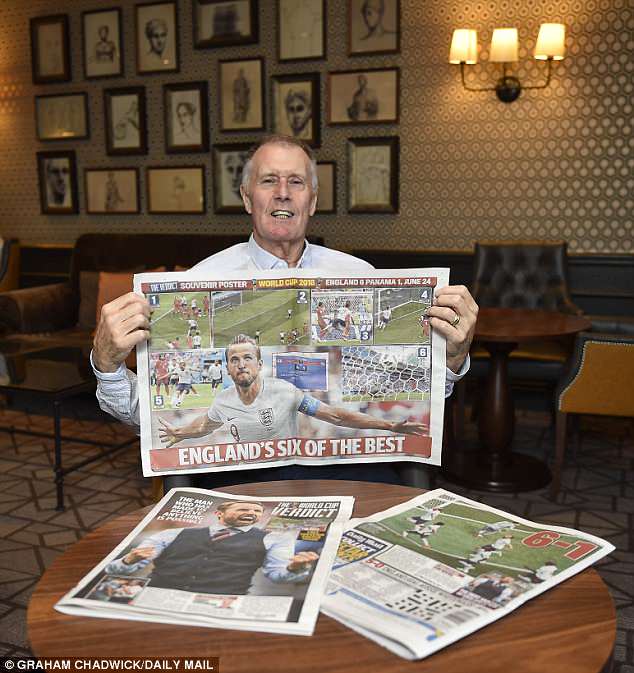 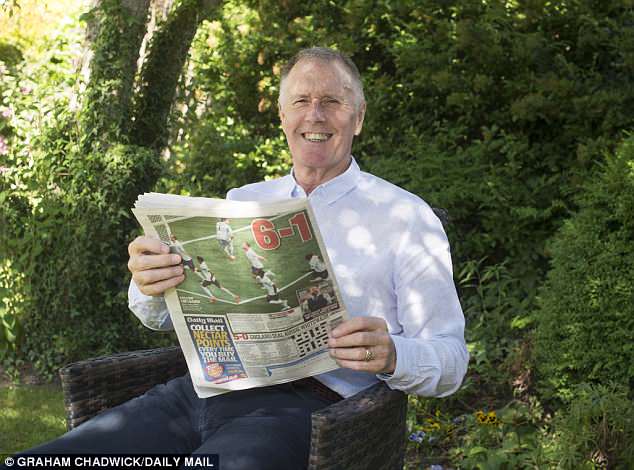 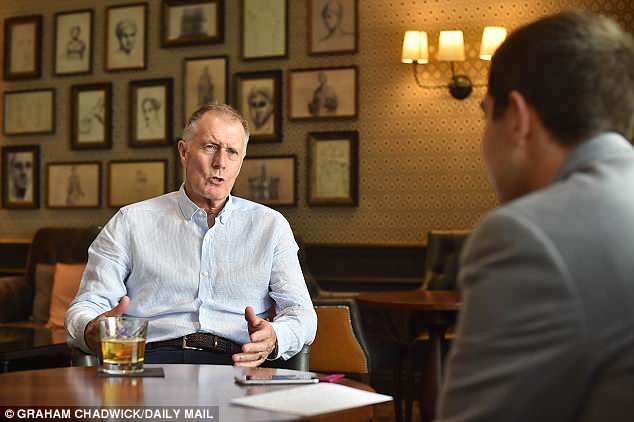 Reflecting on his early career, Hurst admits he wasn’t even the best player in his school 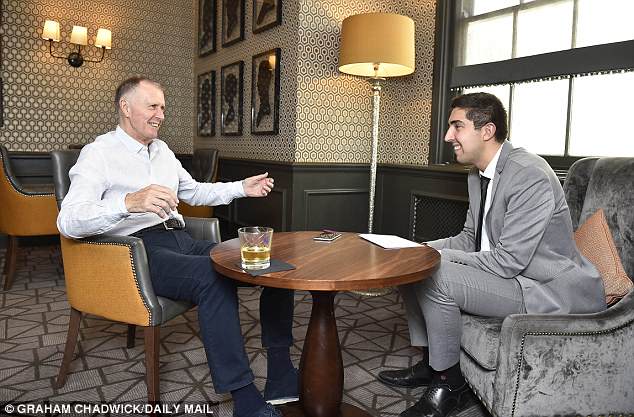 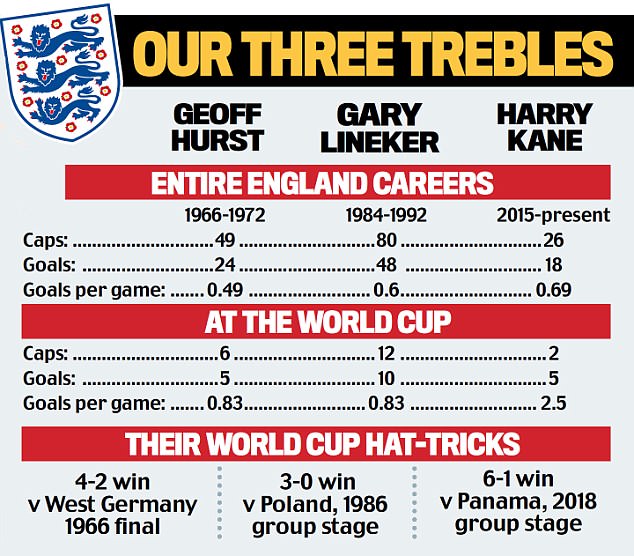 Kane’s hat-trick in the 6-1 win over Panama on Sunday saw the Tottenham striker become only the third Englishman to score three in a World Cup game — joining Hurst against West Germany in the 1966 final and Gary Lineker against Poland in 1986.

‘I scored the perfect hat-trick,’ Hurst says. ‘Right foot, left foot, header. When I was only seven years old, my dad had me in the garden working on my weaker left foot. It’s amazing to think that work as a little boy in your back garden can reap dividends in a World Cup final.

‘But we shouldn’t take anything away from Harry. Cynics say, “You don’t want England to win a World Cup, you don’t want people to score hat-tricks, because your records will be broken”. Nonsense. Nothing makes me happier than England winning.

‘I did a promotion for walking football a while ago and Harry was there. He got six goals. I managed to fall over, which is embarrassing in walking football. But as we were playing five-a-side together, he kept addressing me as Sir Geoff instead of just Geoff. “Pass it, Sir Geoff,” “Over here, Sir Geoff,” “Leave it, Sir Geoff.” It was very nice, but come on! It shows how respectful he is and what a class character he is. He is so down to earth. If he gets another hat-trick, he might just call me Geoff!

‘When Harry first came through, I said, “He is a much better player than you think he is”. You can see his intelligence, passing, quality, heading. As a great player, you need all those attributes and he has it all. His penalties were fantastic, not just the best I have seen for England but the best anywhere. People will say, “Oh, we should score penalties”, but how many players have we seen miss them in an England shirt in big games? Let’s be positive about his technical quality. 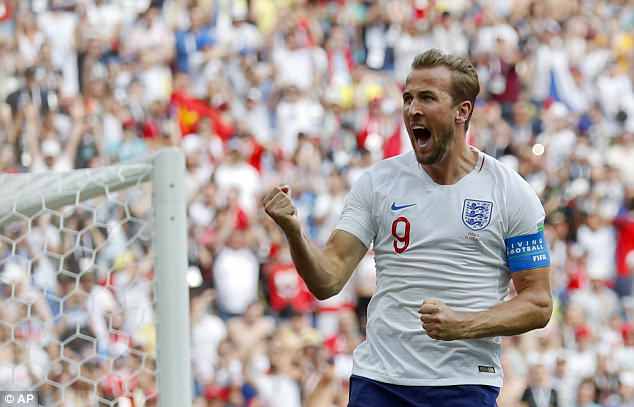 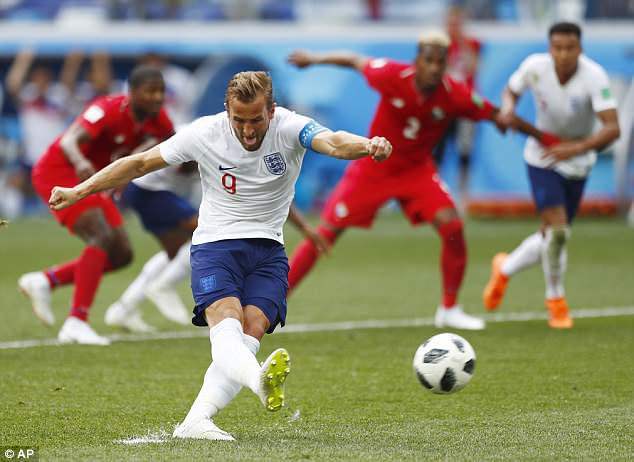 ‘I see similarities between myself and Harry, particularly in his attitude. Look how often he was put out on loan. When that happens so often, it does not scream international superstar. A player with the wrong attitude might have faded away. But he has been determined.

‘As for me, I wasn’t even the best player in my school. That was Terry Copsey and, for all I know, Terry became an electrician. I look back in astonishment. Nobody was scouting me from clubs. A friend of my father wrote to Arsenal and West Ham at school leaving age. So my first job interview was a trial at West Ham.’

Hurst’s talents intensified when he was converted from a midfield player into a forward at West Ham but the great irony of his headline-grabbing exploits is that he did not begin the tournament in the starting line-up. He watched from the bench as England drew their opening match against Uruguay but broke into the team when Jimmy Greaves was injured.

‘It was only when I listened back to clips of that Uruguay game that I noticed we were booed off. The booing was astonishing. 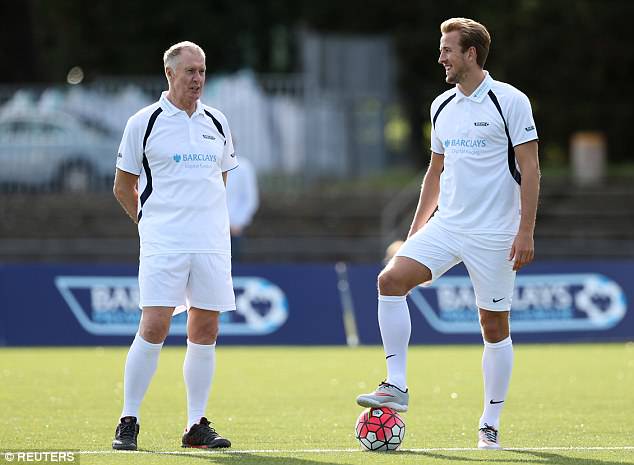 ‘It was funny this week to see England players on inflatable unicorns in the swimming pool. The last time I saw one of those… my 16-month-old grand-daughter Rose Elizabeth was in the pool with her mother! But it makes sense to lighten the mood.

‘After our difficult start, Sir Alf Ramsey allowed our wives to visit us one night. At 10pm, he came in and said, “Good night, gentlemen” and within seconds all the wives left.

‘He also took us to Pinewood studios to watch a couple of James Bond films. Sean Connery was there. He even let us have a glass of wine, which was astonishing during a tournament. Everyone stuck by his rules. Whenever we left a meet, I would say, “See you, Alf”. He would reply, “Maybe”.

‘He kept us on our toes, making you prove yourself to him every time. You can’t have the same discipline today. Alan Ball once said to me, “How do you give a b******ing to a multi-millionaire?”’

In Hurst’s era, there were no multi-millionaire footballers and this is one of the reasons he does not possess a single keepsake from the day he won the World Cup.

His medal belongs to West Ham while his shirt was auctioned off. As a hat-trick hero, convention says he should have kept the match ball. One German player, however, had very different ideas. ‘I remember being sat in the dressing room wondering where it was and thinking it will turn up. It never did for 30 years.

‘Helmut Haller scored the first goal of the game. He stuffed the ball up his shirt and ran off to Germany. It stayed in his loft until 1996. Then the Daily Mirror paid him £80,000 to bring the ball back. I have never owned it. I ended up kissing it for the front page of the paper. I don’t have anything from that day. It doesn’t bother me. 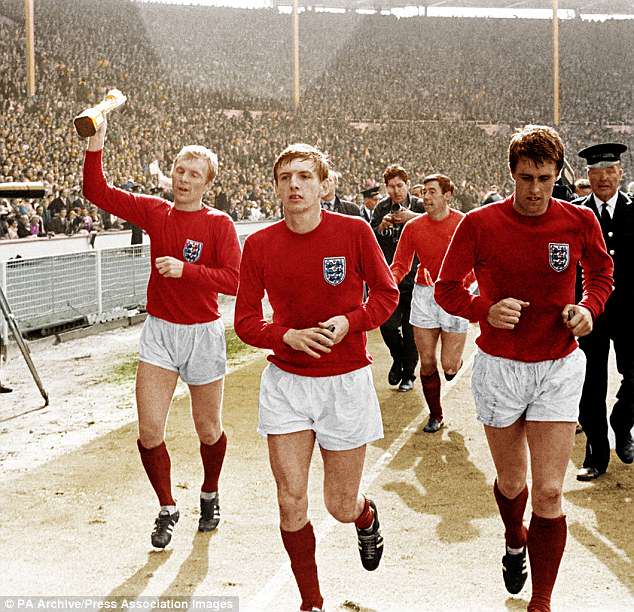 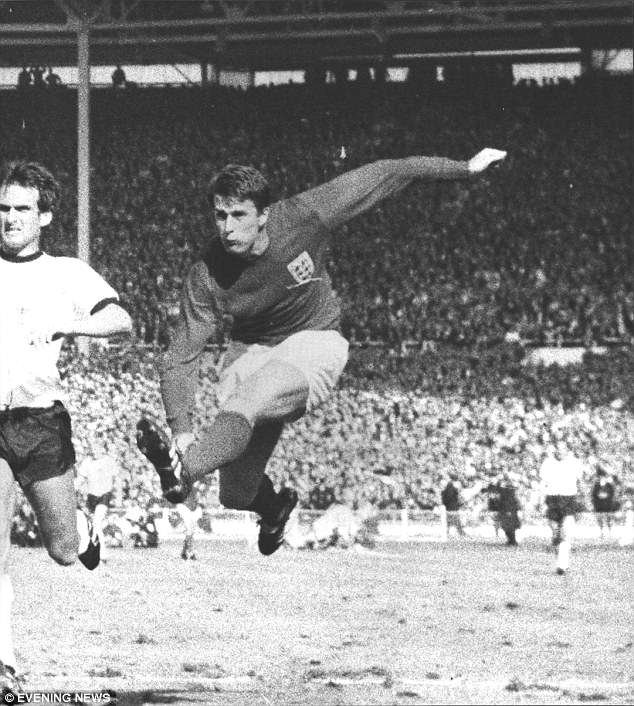 ‘Twenty years ago, we were at home and I asked my kids what they would like from my possessions. My eldest daughter Claire said, “Dad, that settee in the living room, that’s what I’d really like”. We are just an ordinary family. I decided to auction the memorabilia and split the money. After all, who do you give the World Cup winners’ medal to? It would be huge favouritism.

‘My wife is not into the showbiz side or anything like that but she was not happy the night of the World Cup final. The four semi-finallists had a banquet and the wives were not invited. Could you imagine? It was like we were playing in medieval times.

‘I was told Jamie Vardy’s wife flew to Russia in a private jet. Everything’s changed in football — except the goalposts. It makes me laugh that the phrase is “move the goalposts”, when they are the only things that have stayed the same.’

Hurst, it should be said, looks splendid at 76. He underwent a hip replacement operation eight weeks ago and watched England’s wins in Russia from the comfort of his bed. But he is already back into his recovery. He is in the gym at 8.30am three times a week, training with his grandson and has an offer from FIFA president Gianni Infantino to be a guest of honour at the World Cup final.

But the past year has brought challenges and, for the only time, Hurst’s demeanour dips. ‘It’s hard to see a lot of the 1966 team,’ Hurst reflects. ‘Four of them have dementia. I still see Gordon Banks and speak to George Cohen. We saw a few at Ray Wilson’s funeral.

‘I had a mini-stroke last year. I was only in for a day and I was lucky it was mild. It was a shock because I have never had health problems. I was never injured at West Ham.

‘Psychologically, the hip and the stroke were a bit heavy but I am through it now. My closest friend in the team was Martin Peters and he has Alzheimers. It has become almost impossible for me to see him. He wouldn’t recognise me. Martin’s wife Cathy and my wife speak every day. It is an incredibly difficult period for her.’

In happier times, the 1966 boys fearlessly took on the world and it was not only the German opponents up to mischief. After defeating Argentina in the quarter-final, tensions boiled over in the tunnel.

Hurst recalls: ‘I remember some commotion. The journalist Brian Glanville said the other day that the Argentines p****d up against our dressing-room walls. Gordon Banks recounts that they threw a chair through the window of the dressing room.

‘Nothing came out back then. Alf told the players, “They’re on the way home, you’re into the semi-finals, so move on”. Gordon finishes that story with a great line — Nobby Stiles appeared through Jack Charlton’s legs and said, “Let the b******s in!”

The evening of the World Cup final remains etched into Hurst’s memory. He smiles: ‘We couldn’t just have a boring banquet. I organised for us to go to Danny La Rue’s club in London. Ronnie Corbett did a piece! We drank anything and everything.

‘The story goes that Jack Charlton ended up in some garden in east London. But the day after, I went home and did what I did every Sunday: cleaned my car and cut my lawn. It’s true.

‘The week after, I was asked to present a car at a bingo hall in Ilford. As I entered the stage, the presenter announced me as the hat-trick hero GEORGE Hurst. Getting my name wrong brought me quickly down to earth.’ 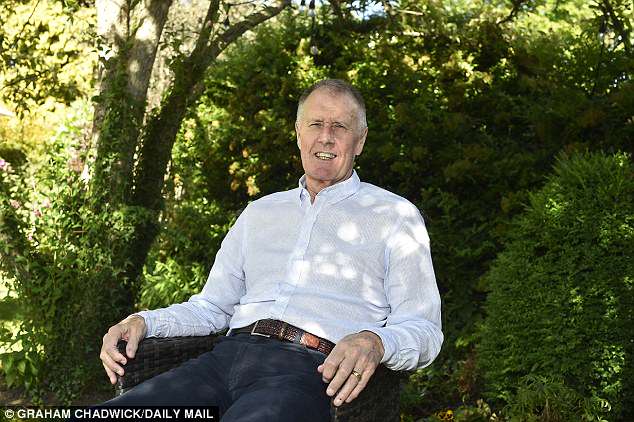 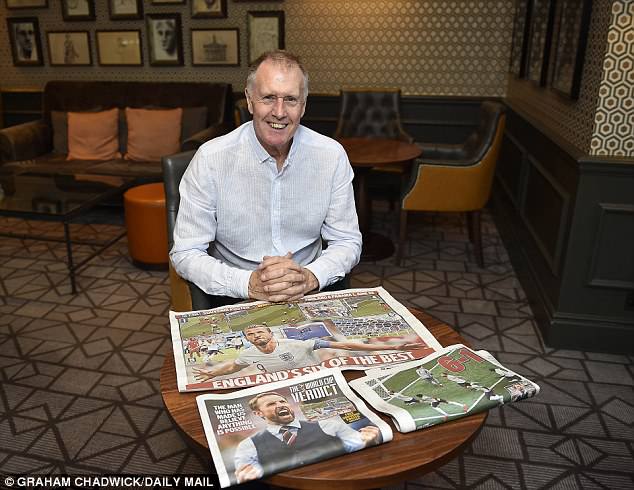 Having initially thought England could get to the quarter-finals, Hurst is now more hopeful 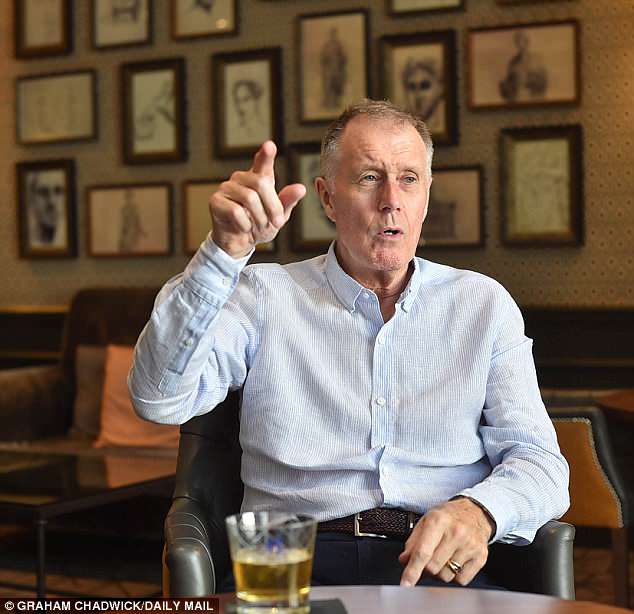 It is safe to say the fuss around Kane will be greater if England achieve the improbable in Russia. Hurst is giddily growing positive.

‘If you had asked me before the World Cup, I’d have said quarter-finals. But with how we have played, we can look further. Some big nations are struggling. We could go all the way. We have fearless young players. Experience is a good thing but the responsibility feels bigger. If you look when we won the World Cup, Jack Charlton kneels down and Bobby broke down. Then Alan Ball and I were just thinking “Wow” and relishing it.

‘We have the talent. We have players from Tottenham who play aggressive football and ball players from Manchester City’s excellent team. We have a real chance.’

See Sir Geoff live on stage this week in Southend or Milton Keynes and next week in Horsham. Details www.A1sportingspeakers.com 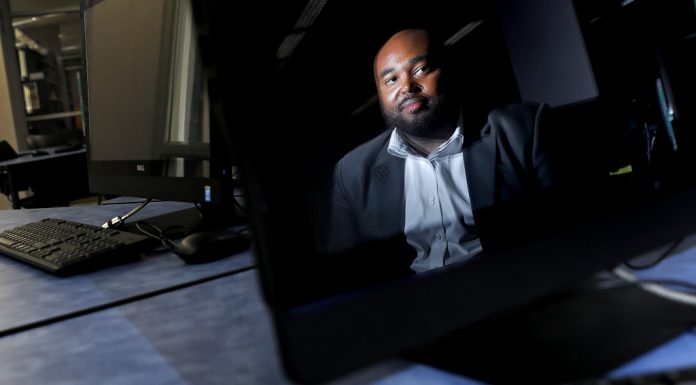