Arenal’s FA Cup match-winner Emile Smith Rowe was reprieved, relieved and rejoicing after his dramatic role in the 2-0 defeat of Newcastle.

Pierre-Emerick Aubameyang then slid home the clincher after ever-dangerous Kieran Tierney capped the move of the match with a precision cross.

Midfielder Smith Rowe said: “A bit of a relief for me because obviously the incident before wasn’t ideal and it definitely wasn’t intentional, so I’m happy to get the goal and happy to go through to the next round.

“We’ve been working off the pitch to get closer as a group and it’s starting to show on the pitch and as a group we are so happy to keep winning games.”

Meanwhile, on the transfer front, Martin Keown has accused Mesut Ozil, who is tipped to join Fenerbahce, of “undermining” Arsenal.

Ex-Gunners defender Keown told talkSPORT: “It hurts me that a player of that talent can’t get on the football pitch, it’s a crying shame.

“For me, he doesn’t go down as a legend, because he doesn’t match the energy and determination of legends that I’ve seen at that football club.

“If he had Tierney’s determination, coupled with that ability, he might’ve gone down as the best player ever to play for Arsenal.

“He’s become calculated in the way that he’s undermining the club with tweets, and I think it’s now time to go.” 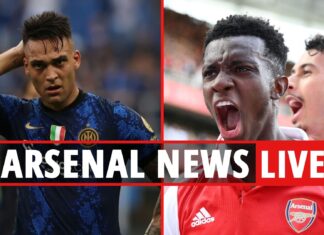 sportslatestnews - May 26, 2022
0
Blow for Prem giants as Dembele is set for PSG Chelsea have been dealt a transfer blow as Barcelona winger Ousmane Dembele could join...